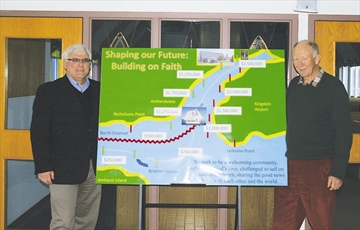 Press release photo
Chuck Wilson, left, and Christopher Sproule are proud to be halfway to their fundraising goal
Edith Rankin United Church in Kingston’s Collins Bay area has an exciting holiday season ahead. On Nov. 9, members of the congregation kicked off their long-anticipated fundraising campaign to make additions to the church. The congregation has a goal of raising $2.5 million and by end of November they had already surpassed $1 million.

“I’m quite proud,” says church elder Christopher Sproule, who also chairs the advanced gifts phase of the project. He has been collaborating closely with Chuck Wilson of James D. Klote & Associates Inc., which is a consulting company for philanthropic causes.

“It’s a transformation experience going through a capital campaign,” says Wilson. “It’s a blessing to see.”

The church, which was originally erected in 1959, has not undergone any significant renovations since the sanctuary was rebuilt in the mid-1980s.

The church’s proposed renovations will include raising the parking lot so that the outside steps can be removed.

“A lot of it is an accessibility project,” says Sproule. “It’s really sad to see seniors stop coming because they can’t get up the steps.” Other measures will include a fully accessible washroom, a nursery in close proximity to the sanctuary and larger meeting spaces for community groups.

“We’re building for ourselves but we’re also building for the programs we want to run,” explains Sproule. These include programs such as Senior Wellness Living Sessions, Spirit Sisters meetings and a youth Sunday school, all of which are open to the local community as well as the congregation families. “There’s a thousand people a week going through these doors,” says Sproule.

During the initial phases of the campaign, Sproule says that the choice had to be made between revamping the sanctuary or expanding the program spaces.

“We promised the congregation that we wouldn’t go into debt over this campaign. We decided since we couldn’t afford to do both, we’d focus on serving the community,” he goes on. “We had a congregation vote and it was overwhelmingly in favour of proceeding.”

So far, all of the funds raised have been donated by congregation families after home visits made by church elders and other volunteers.

“Going out and visiting the families, we see how important that is,” says Sproule. “We’ve found families that fell through the cracks.”

Sproule says that the excitement of the campaign and the buzz surrounding the church has led to 25 new families joining the church since September. “If anyone is looking for a church,” says Sproule, “We’re here, we’re strong, we’re vibrant, and we’re looking to make a difference.”

After three months of fundraising, the church’s renovations are slated to begin in mid or late 2014, with completion planned for 2015.