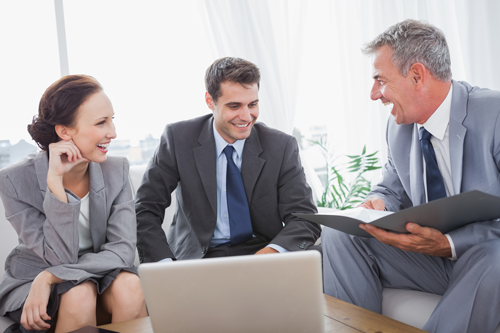 You’ve been there: the new person on a job or in a school, trying to break into an existing social structure. You’ve finally been allotted a spot at the outer edge of a ‘click’ in the act of discussing the absurdities of the day. All of a sudden, you can’t stop yourself; you commit the social faux pas of injecting a humorous observation into the conversation. The dead air’ and stone-faces make it clear that you have intruded. Who are you and when did you fall off the turnip truck? hangs in the air like a pre-color TV rainbow. You’re considering that what you just said was ten-times funnier than the most recent comment by the ‘good ol bo’ next to you but he or she received a full round of laughter.

What’s the dealio? Why do group dynamics require a hazing period for newcomers? What’s the source of the unwritten rule that the old guard must refuse to ‘get you’ for an undefined period of time?

Even after you finally ‘bond’ with a group, the basis of your friendship remains aligned to humor. That is, the extent to which you are seen as a joke vs. intentionally funny equals the level of respect you are accorded. Further, relationships can be defined by the intimacy of humor “ to be co-equal friends, you must function on an equal basis humor-wise.

As a consultant, I constantly move from one new job and social setting to another. Upon arrival, I’m tolerated as a professional advice-giver from ‘œon-high’ but there is no expectation at that point that I will become their friend. The fact is, I will develop closeness with many of them in the course of my duties and with some I will remain life-long friends.

To serve a congregation as a truly effective consultant in the time allotted to a campaign, it’s helpful to move quickly into a deeper level of relationship. Breaking through the ‘humor barrier’ is a great way to get there but it’s not for the weak-kneed or overly sensitive. It takes effort, persistence and a thick skin. But, once they ‘get’ your humor, they give you space in the ‘relationship room’ at the center of their thoughts/brains.

Years ago, when I was Chief Engineer (like Scotty on Star Trek) on a U.S. Navy Fast Frigate, I was asked, How can you be so happy all of the time? You’re the Chief Engineer! The last guy with your job got upset every time something on the ship broke “ he was upset a lot! You seem to like it when things break. That’s when it occurred to me, the fact is, I enjoy solving problems and fixing things because I had, years before, made the conscious decision to welcome challenges. Keep your sense of humor when all about you are losing theirs, is my philosophical spin on my favorite Rudyard Kipling poem.

I insist on having a good time “ no matter what! Some years later, my wife and I owned a business that was flattened by a tornado. The picture in the paper showed us in front of the devastation, smiling. People found that inspiring. For several years we have maintained a page on an online site called Caring Bridge, relating the ups and downs of my wife’s battle with cancer. We receive thousands of visits when new entries are made, partly because we always include elements of humor.

How does this relate to my job as a capital campaign consultant? Well, I insist on keeping it light. I endeavor to inspire my volunteers to have fun when the temptation to lose heart is overwhelming. Good humor is a shock absorber when the going gets rough. Leadership that maintains a confident and positive sense of humor keeps a campaign on course.

During a recent campaign, I was assisting another consultant for a few weeks. During the first Steering Committee meeting, introductions were being made around the table. When it got to me, I took it upon myself to introduce both of us. This is Glendon Smith, he’s the brains of the operation. I’™m Chuck Wilson “ I’m the eye-candy! The room erupted in laughter, breaking through the ‘humor barrier’ and building instant rapport. Glendon is still asked, How’s Eye-Candy doing?

To become fast friends fast, make the conscious effort to get a person’s sense of humor.