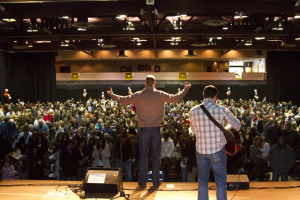 Poughkeepsie, NY More than 2,000 enthusiastic worshipers filled the Mid-Hudson Civic Center to near capacity this past Sunday. Rather than meeting for a wrestling match, concert, or hockey game, the crowd of young families, West Point cadets, and grandparents gathered for One Big Worship Event a Sunday morning church service. Sounds of praise, worship and jubilant cheers could be heard throughout the lunch hour while Grace Community Church, of Washingtonville, gathered as one combined church family on this snowy Sunday to celebrate the launching of their Be His Story vision campaign.

Although Grace church is located nearly an hour’s drive to the south, the leadership called the entire church body to head north for an historic gathering at the only regional facility available to host the full congregation. Nationally noted as one of the fastest-growing churches in America, Grace has swelled from 600 worshipers in 2009 to 1,800 in 2012. Even a long drive to another county, crossing the Hudson River, and having to dig out of a weekend snowstorm did not stop the 2,141 people from breaking every non-holiday church record by showing up in droves.

=I couldn’t stop the tears from coming, said Melissa Hardy, of the campaign steering committee. Rallying together today to kick off the Vision Campaign felt like what it’s going to be like in heaven. Sometimes I’d stop singing just to hear the voices swelling in praise around me. Simply amazing.

Campaign discipleship leader, Ed Finnerty, rejoiced, Words cannot express how cool this is to worship the Lord with 2,100 other people. I am amazed and humbled to have a small part in the big outpouring of God’s movement of revival.

Because of the seemingly unstoppable growth at Grace Community, the church has carefully strategized to launch numerous multi-site locations around the county in order to accommodate the thousands who regularly attend on weekends and during the week. Sunday’s event was the ‘kick-off’ of a multi-year capital campaign designed to fund this far-reaching evangelistic effort. After a rousing time of worship and heartfelt congregational testimonies, Lead Pastor Jarrod Jones stepped to the microphone for a vision-casting message to all who were gathered. 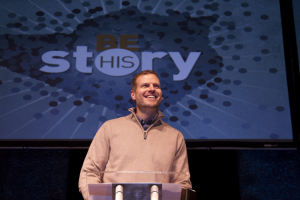 We won’t fear risk, cried Jones from the platform. Even if it sounds crazy, if it’s Spirit-led, we will trust the Holy Spirit, hold hands, and go for it. Friends, that’s exactly what we’re doing. That’s why you are here today. A vision campaign during one of the worst economic climates ever! The message was punctuated by frequent applause and cheers from a church body obviously overflowing with support. May it be that through this vision campaign, friends, neighbors, and our children will still be talking about it decades from now.

The campaign is being directed by James D. Klote & Associates, Inc. JD&A is a full-time and on-site capital stewardship consulting firm based in Falls Church, Virginia, and was recently ranked the #1 church consulting firm in the United States by Volkart May, a market research firm in Minnesota.

Jim Klote, President of JDK&A, said, In the 24 years of directing capital campaigns, this is the largest and certainly one of the most enthusiastic kick-off events we have ever had the privilege of directing.

‘My firm’s partnership with Grace began several months ago with a Feasibility Study which reached out to over 500 member families of Grace Community, Klote stated. The support for the ministries offered by Grace Community has been incredible. In addition, the fact that they have embraced the person-to-person, every member visit ensures a most successful campaign effort. My firm is proud to be associated with Grace Community Church and the ‘Be His Story’ vision campaign. 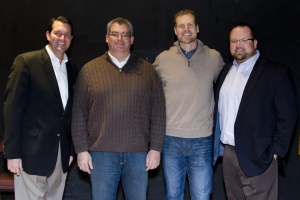 Adrian Schoonmaker, the James D. Klote & Associates consultant assigned to Grace Community stated, Of any church or ministry where I have directed campaigns, Grace Community is the most passionate and visionary. With the kind of energy and commitment evident in both leadership and congregation, the church is unstoppable in accomplishing their mission.

Campaign Spiritual Emphasis Chair, Jay Magnelli, was deeply moved by the service. To witness a fulfillment of an almost 30-year vision, and sensing that we are just on the edge of even more amazing things, is truly overwhelming, said Magnelli. Truly a day of thanks and rejoicing!

The ‘Be His Story’ Finance Chair, Bill Quackenbush, reflected on the church’s history. Thirty years ago, the 23 who founded the church envisioned a church of 2,000. Today, the first time the whole congregation has been together in more than a decade, nearly 2,200 met at the Mid-Hudson Civic Center, the only venue regionally that could hold us all. Today we celebrated God’s continued blessing as He restores people to Himself through the ministry of Grace, as well as the sacrificial giving of those who have already committed to the Vision Campaign. 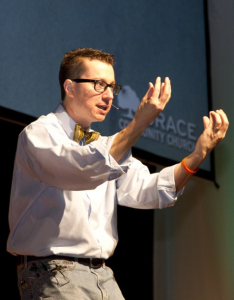 Campaign Chair Larry Dauer, made the exciting announcement that even before the launch, more than $1.6 million in commitments have already been made by Grace leadership and early donors, representing only 5 percent of the church body. All signs suggest that Grace Community Church will meet and exceed their financial needs in the Be His Story campaign. Thick in the air, however, was a sense that this campaign is only the beginning of the rest of the story.

The awesomeness of God was so clearly displayed today, said Associate Pastor Martin Balaam. It warms the heart and comforts the soul to know that the harvest in the Northeast has only just begun. Steering committee member Fred Metzger agreed, The Holy Spirit showed up at this amazing event. I believe a revival has started in the hearts of His people.