Ithaca, NY – Despite cold weather, more than 100 members and friends of St. John’s Episcopal Church turned out and pitched in on Sunday for a very special parish lunch. Its purpose was to initiate a fund-raising campaign for the renovation of their historic church building. Located on the corner of Cayuga and Buffalo Streets, the handsome Gothic structure, built in 1859-1860, stands on the site of the original church, built in 1824 “ only four years after the founding of Ithaca. Not only a resonant space for Episcopal worship, the church has traditionally provided a home for a variety of in-city social service groups, including Loaves and Fishes. Appropriately, it was the volunteer staff of Loaves and Fishes that prepared and served the food for this kick-off event. 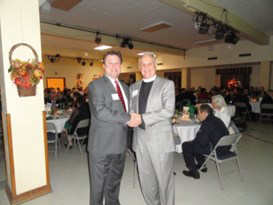 In keeping with the church’s history, the theme of St. John’s million-dollar campaign is: Living our Faith, Sharing our Future “ with the Community. The work to be done, including repair of the sanctuary roof and bolstering of ceiling trusses, will benefit not only the congregation, whose numbers continue to grow, but also the many organizations that meet under that roof. As evidence that the stated goal is within reach, former Senior Warden Lloyd Hall on behalf of the campaign’s steering committee announced the astonishing news that over $690,000 had already been raised from about 15% of the parish membership. The many choirs of the church sang several songs, the tables were decorated and everyone was sent a personal invitation to attend. Many parishioners were heard saying, “what a nice event”, “we should get together like this more often,” & “I can’t believe how much money has already been raised.”

Contributing to the excitement of Sunday’s event, Pastor Richard Rose of the neighboring First Baptist Church delivered the main address. He emphasized the vital place that St. John’s holds in the community and the phenomenal scope of its ministries.Remarks were overheard that the lunch provided a great chance for parishioners from all three worship times to pray and talk together.

The campaign, which is scheduled to wind up at the end of February, is being conducted in conjunc-tion with the church’s regular annual appeal. It commenced with a series of focus groups in which the rector, the Rev. Richard A. Towers, asked parishioners, “What are your Hopes and Dreams for St. John’s?” Their answer is now clearly seen: to unite in prayer and to renovate the church so that, from this strengthened base, they can carry out existing and new missions within the Ithaca community.