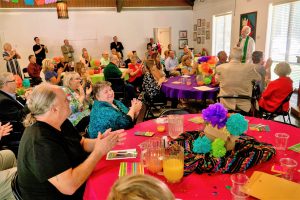 Lufkin, TX – St. Cyprian’s members gathered early on Sunday, July 30, in the Parish Hall. The crowd could feel a sense of celebration fill the room as they assembled. Festive streamers and lights hung from the ceiling, complimenting the morning sun that bathed the hall. Everyone was treated to a buffet of breakfast tacos, tasty fruit, and refreshing drinks, catered by Lufkin’s favorite caterer, Tome’. Everyone was grateful to the DeVore family who served as Kick-Off event chairs for organzing the event.

St. Cyprian’s Episcopal Church is conducting its first Capital Campaign since 1970, following a devasting fire that destroyed the church building. $600,000 was raised in the previous Campaign. A $3,500,000 goal has been set by church leaders for this  Campaign.

Enhancing worship, caring for the campus, and preparing for the future are the primary objectives of the campaign. Some of the key components include: installing a new pipe organ, updating air handling systems, repaving the parking areas, adding functional and decorative exterior lighting, enhancing accessibility, renovating interior spaces, and strengthening capital, maintenance, and outreach funds.

The Kick-Off event began with an exciting video that celebrated the ministries of St. Cyprian’s. Members of different ministry teams created a lip sync video, to the music of Kool and the Gang’s top hit “Celebration.” 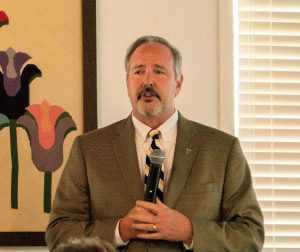 Following the video, Mr. & Mrs. Jake and Laura Squiers, co-chairs of the Campaign’s Steering Committee, expressed gratitude to those in attendance, thanked the persons who will be serving as campaign leaders, and encouraged all members of the parish to receive a campaign visit. Squiers also reinterated how much St. Cyprian’s meant to his family before introducing the campaign’s Honorary Chair Mr. Jack Irish.

Mr. Jack Irish along with his wife Millicent greeted those in attendance. Jack humorously assumed the honorary chair was bestowed upon him since he was the only 1970 campaign leader still on this side of heaven.

Then, his words took an evocative turn, challenging the parish to remember three important ideas. Mr. Irish pointed out that the previous generation had built the very best sanctuary possible. He looked at his audience and said, “It is your turn to finish out the rest of the buildings with your best efforts.” Second, he said, “Follow the consultant’s lead,” reminding the parish this is the same consulting firm that guided St. Cyprian’s previously succuessful 1970 Campaign.  Last, he spoke an inspirational word, exhorting the church to remember God is the architect of the church and will see us through as we stay in step with Heaven’s design.  His words were received with a standing ovation. 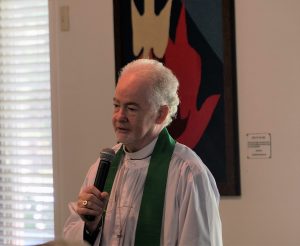 The Rev. Ralph Morgan took center stage to speak positive words of support for the timing of the Campaign and gratitude for the campaign leaders. He graciously invited persons to receive a visit and to consider making a pledge. Father Ralph introduced Bishop Deanna Harrison, who offered greetings and support from the Episcopal Diocese of Texas, via video.

Mr. Jim Todd, a representative of the Advance Gifts team, shared with the parish how meaningful it was to be a part of the first phase of collecting pledges. He thanked members of the team for their efforts, expressing particular gratitude to Mr. Rufus Duncan for leading the Advance Gifts team. 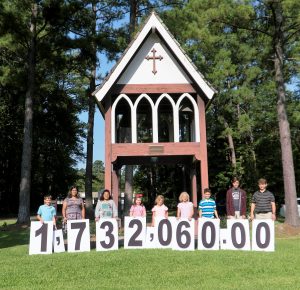 A highlight of the morning was when children and youth began to enter the Parish Hall holding two-foot tall numerals. The first four numbers revealed that $60.00 had been raised. One by one others entered, to reveal a seven figure number.  Rev. Morgan, with the help of the future generations of St. Cyprian’s, announced the parish had raised $1,732,060.00, so far. These early pledges give the campaign significant momentum as it heads into its broader visitation phase.

The public visitation phase began in earnest the following day and will continue through the fall of 2017. The goal is to visit with each household, allowing all persons to have the opportunity to learn about the campaign’s plans and dreams and consider offering a pledge. Father Ralph closed out the morning, offering a heart felt prayer and blessing.