Arlington, VA – Over 800 members and friends of the Unitarian Universalist Church of Arlington, Virginia (UUCA) gathered at Washington and Lee High School in Arlington on Sunday to kickoff their latest capital campaign: Renewing Our Spirit, Renewing Our Spaces. 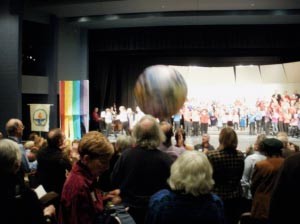 The congregation sends an inflatable globe around the auditorium while singing, “We’ve got the Whole World in Our Hands”

The campaign is an ambitious effort to make major improvements to the buildings, parking lot, and building systems, as well as build a major addition for additional programming and outreach to the community. If Sunday is any indication, the 63-year-old parish is well on its way. Just over $3.2 million has already been pledged to the effort by only 90 donors.

Sunday’s service brought all of UUCA’s members and friends under one roof for a single service, something that hasn’t happened at this 3 service a week congregation in over eight years. Ministers Michael McGee, Linda Olson-Peebles and Carlton Smith invited members of UUCA onto the stage to help tell the history of this dynamic church that had its beginning in the late 1940’s as a daughter congregation of All Souls Unitarian in Washington DC. 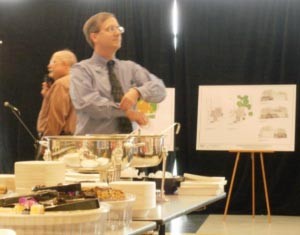 Co-chairs Bill Fogarty and Allen Keiswetter (background) roll up their sleeves and get ready to announce the pledge total.

Two of those early members of the church, Virginia Karl and Gene and Dorothy Mulligan, were able to share what it was like to be a part of building a new church at such a young age. Rev. Olson Peebles invited a young couple with two small children onto the stage to show what those early, founding families looked like when the church was first started and encouraged the congregation by saying, “Now it is our time to do what these families did so many years ago.” But that doesn’t mean that senior citizens like Karl and the Mulligans are sitting this one out. Instead, they have become generous donors once again and have already made their pledges to the campaign. 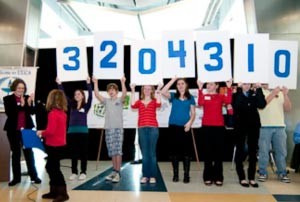 After the service most of the congregants gathered in the cafeteria at WL High School for a light lunch and an update on the campaign progress. Co-chairs of the campaign, Bill Fogarty and Allen Keiswetter, reviewed the list of needs and then unveiled the grand total pledged so far. The $3.2 million represents a fundraising record for UUCA. In fact, Keiswetter noted that at this early stage in the campaign the total is already over 2.5 times what the church raised from the entire congregation during the last campaign. Keiswetter added, “It’s hard to imagine a better kickoff.” Both Fogarty and Keiswetter have noted that the success is due, in no small part, to the leadership of James D. KIote & Associates, the stewardship consulting firm chosen for the project. Rev. Olson-Peebles would agree having said, “There is no reason why a church of our size, history and support should choose anything less than the best to lead us in this campaign. Klote & Associates is the best and we have been very pleased with their work.” 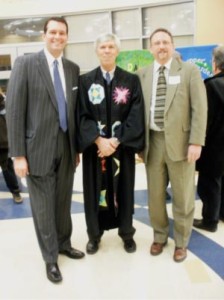 There will be plenty of work to do over the next several months as UUCA reaches toward the total visionary needs of the campaign. The next phase is a planned personal visit with every member and friend of the church, a signature part of the Klote & Associates strategy. It’s also a task that Fogarty is looking forward to. “We have had more than 100 personal conversations so far. Every participant, whether a campaign volunteer or the person visited, will tell you that these conversations have been among the most interesting and important they have ever had about the church. New friendships are being made, and old friendships are being strengthened,” Fogarty said. He added, “When a volunteer gets in touch to make an appointment, please welcome the opportunity to build our community. You will be glad you did; just ask those who have done it already.”