Our Saviour’s in Naperville, Illinois Kicks Off Campaign with $2.5 million raised! 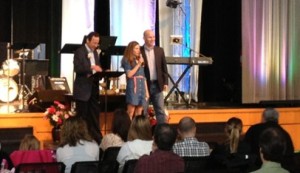 Lane Lewis (left) and Brett and Marnie Lindberg (right) who shared their story at the kick-off service on the Celebration! campus

Naperville, Illinois – A Different Kind of Campaign. That’s how many members and leaders described the Debt Free, to be  campaign that kicked off on Sunday, April 21st at Our Saviour’s Lutheran Church in Naperville, Illinois. Our Saviour’s has invested a tremendous amount of time, energy and resources over the last ten years developing its Celebration! Community Life Center, as well as the facilities at its main campus two blocks away. Celebration! has been an integral part of Our Saviour’s front-porch ministry to the community, offering non-traditional worship, youth programs, a popular Children’s Center pre-school, health clinics, homeless shelter, a coffee shop ministry and more. At the same time, some important investments were made on the main campus to repair aging parts of the building and to acquire adjacent property for future expansion opportunities. 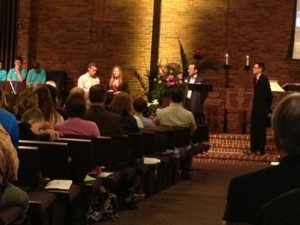 Lane Lewis (center), Pastor Jon Dumpys (right) and Dave & Lisa Hamman who shared their story during the 10:30am kickoff service.

Only one challenge remained: paying for it. Previous campaigns to pay for these projects always seemed to miss the mark resulting in smaller principal payments and larger interest payments on a substantial debt of over $6.5 million. The loan payments were even threatening to cut into Our Saviour’s ability to continue its vital ministry.

Enter a different kind of campaign. That’s how Lane Lewis, chair of the Debt Free, to be debt elimination campaign, described it to Our Saviour’s members on April 21st as they gathered for worship. This campaign would need to accomplish what no other campaign had come close to achieving in the past: raising $7 million to cover both the $6.5 million of principal and $500,000 in associated interest costs on the current loan. Although the potential was there for donors to feel fatigued from yet another lackluster campaign, (now the 4th in 12 years) that hasn’t happened. The leadership really stepped up this time. It has been different. 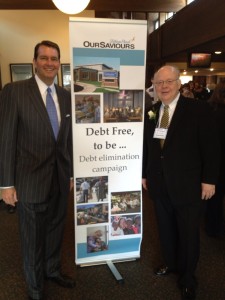 From the very beginning, said Lewis, this has been different. From the multiple focus group meetings held to gauge member’s interests, passions, and opinions held back in January and February, to the structure of the campaign focusing on open, transparent communication and personal visits. In every way, this campaign looks, acts, and feels different. Of course, those are just words and words need to be backed up with action, said Lewis as he offered proof, positive that this campaign is already different. After just 75 pledges, the Debt Free, to be campaign has secured over $2.5 million in pledges from this congregation of several thousand.

To put this in perspective, said Lewis, Our last campaign gathered only a little over $2.1 million in total pledges from 509 donors. In addition, the very same 75 families who contributed $2.5 million to our current campaign contributed only about $750,000 to the last campaign. That marks about a three-and-a-half times increase from the same donors. Something different is truly happening at Our Saviour’s.

In addition to some testimonial stories, Pastors Shaner and Dumpys shared encouragement from the text for the day from John 21:15-19. Members were reminded that as the apostle Peter was showered with generous forgiveness, generous love and generous restoration, so we may move ahead with generous hearts and minds having been similarly loved, forgiven and restored by our incredibly generous God. 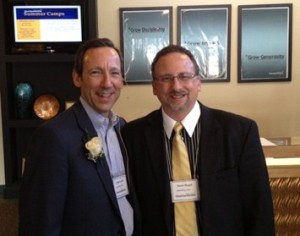 The campaign is being directed by James D. Klote & Associates, Inc. JDK&A, with offices in Falls Church, Virginia, St. Charles, Illinois, and Toronto, Canada, is a full-time, on-site capital stewardship consulting firm. Steve Siegel is the consultant assigned to Our Saviour’s. Campaign chair Lane Lewis remarked that he wasn’t terribly interested in being involved in another campaign when the subject first came up in 2012, having chaired a previous campaign with part-time consulting services. But, said Lewis, after meeting with Jim Klote and learning more about this different, full-time, and very intentional approach to church campaigns, I was All In!

Following a proven method of personal visitation, hundreds of campaign visits will now be taking place with the members of Our Saviour’s by a solid and growing group of willing volunteers.

We can do this, said Lewis about raising the $7 million. The early results shared today at the kickoff prove that it can be done and Our Saviour’s will be much stronger because of it.