Virginia Beach, VA – Following a Readiness Assessment Study in July 2016 with input from over 235 parishioners, the Vestry at Old Donation Episcopal Church voted unanimously to proceed with a Capital Campaign. The goal was to share the capital needs and opportunities identified over many years and by the leadership teams, and the associated estimated costs. Since the summer, Old Donation Episcopal Church has been working on a Capital Campaign effort to build a new worship space, renovate existing offices and meeting spaces, and strengthening future ministry and mission. 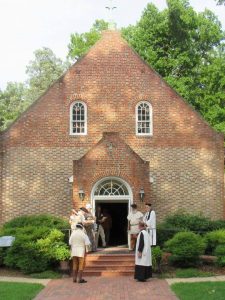 A little over 5 months later, the Campaign is coming to a close, and the results could not have been more pleasantly surprising to all those in the church community. Old Donation received over $3,000,000 in pledges before the Christmas holidays. This is nearly 5 times annual budget and far more than most thought was achievable.

The Rev. Ashley Urquidi stated, “We are continuing to see the fruits of all your work. We had our Mardi Gras Party to celebrate an amazingly successful Capital Campaign during which we raised over $3.25 million with more pledges continuing to come in. This is evidence of the ministry our parish is doing, and the party displayed it to the fullest with a live band, and dancing! Who would think a 379 year old church like ours could reach such heights in giving?”

Old Donation’s historic church is not changing in any way other than freshening up the interior and improving the lighting. The new building plans following the campaign’s completion include a worship hall with 350 people capacity, relocating the office spaces, adding new meeting rooms and a library, and improving the Day School building.

The campaign was conducted by James D. Klote & Associates (JDK&A), which was recently ranked the #1 church consulting firm in the United States by Volkart, a market research firm in Minnesota. “The leaders of Old Donation fully embraced our full-time and resident approach to capital stewardship efforts. They worked hard to achieve this great success,” stated Jim Klote, President & CEO of JDK&A.