Ridgefield, CT – For almost four months straight, volunteers from the congregation of the First Congregational Church of Ridgefield, Connecticut pulled out all the stops in their efforts to reach out and visit every family that considers FCC to be their church home. Every single family was either personally visited or was contacted several times by phone or email as volunteers made every effort to reach them. Those who were unable to be reached through other means by December 13th, received gift bags with a beautiful Our Master’s Plan booklet inside along with an invitation to impact the campaign ” all hand-delivered to their doorstep. 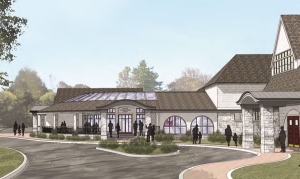 Contributions continued to trickle-in through the holidays and we are now at about $4.5 million and are hopeful to reach $4.6 or 4.7 million. We really appreciate everything that Klote & Associates did for us and with us. We simply could not have done this without you, Pastor Charlie Hambrick-Stowe told the Klote team.

This congregation must be among the most passionate and dedicated that I have ever worked with. I have no doubt, that with their persistence and creativity, they will find a way to accomplish everything that Our Master’s Plan calls for. It was an absolute delight and privilege to work alongside such an inspiring group of volunteers, remarked Klote Consultant, SueEllen Lawton.