A Vote of Confidence Energizes a Church by “Living our Faith, Sharing our Future”

Ithaca, NY – One hundred ninety one years ago St. John’s Episcopal Church was built in the heart of downtown Ithaca, NY. Their history and legacy is rich with many missions and outreach in the community and beyond.

Fr. Richard A. Towers, the Rector said, “I am so excited the St. John’s Vestry voted unanimously to embark upon their largest-ever major Capital Stewardship Campaign in the history of the church. 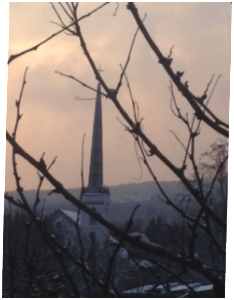 This decision came after several Focus Group Meetings where everyone was encouraged to attend. A full presentation was given including a brief history of St. John’s, a list of current ministries, service opportunities and other interests. A second presenter listed the needs and opportunities along with the vision of leadership to address these concerns. Future ministries and estimated investments were given to complete the presentation. Then folks were given time to ask questions and to make comments, which were recorded and compiled in a final report. Many people said how much they enjoyed getting together and they learned a lot about St. John’s and the different ministries. The members were glad to be updated on the status of the campus and state of the financials. They were asked, “What are your Hopes and Dreams for the Future of St. John’s?”

Each of the individuals and families within the church will be contacted for a personal visit. The church is hoping as a result of the campaign to be able to renovate, enhance their missions and outreach, and create a contingency fund.

The Rev. Richard A. Towers, Rector is fully engaged and enthused about the wonderful possibilities. He became the new Rector in November of 2012.

St. John’s has asked James D. Klote & Associates to assist and guide their efforts. “St. John’s is a vital part of the community. They feed their members spiritually and they feed the hungry physically,” said Glendon Smith, Consultant.