The National Presbyterian Church Kicks Off the Next 50 Years with Over $8 Million Already Raised!

The National Presbyterian Church (NPC) of Washington D.C. celebrated the successful launch of a historic campaign for this landmark congregation of the Presbyterian Church USA. One combined worship service on March 11th filled the sanctuary to capacity as members and
friends alike joined in the celebration.

Inspirational music from both the NPC and Stillman College Choir, as well as a brass ensemble added to the festivities. Anticipation for the ‘reveal’ of how much had already been committed in early pledging grew steadily throughout the morning until finally a group of NPC youth were led into the sanctuary carrying large number boards to help with the announcement. 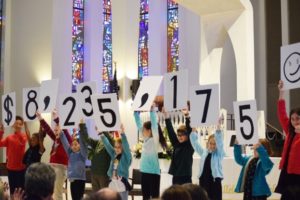 After a slight misalignment of the numbers that initially showed only $2 million raised, the children were again rearranged to show over $5 million raised. This drew a hearty applause until Sr. Pastor David Renwick against questioned the numbers. After a final consultation, the true number was revealed: $8,235,175! This announcement was met with applause, tears of joy, cheering and a standing ovation.

$8.2 million represents almost 60% of the $14 million dollar goal of the Building Together for the Next 50 Years campaign which focuses on improving the church facilities for ministry through renovations, additions, and deferred maintenance. Substantial contributions to the endowment and missions are also included in the goal. Dr. David Renwick commented that it was a GREAT day in so many ways and that words could not express his gratitude. Co-Chair Bryce Pippert added his thanks for James D. Klote & Associates and campaign consultant Steve Siegel by saying, “We would not be here without your team. We’re not done, but we so appreciate your support in getting us to this point.” CoChair Ginny Taylor agreed and added, “So thankful for your guidance through this entire process. We couldn’t have done it without you. Sunday was a real thrill for all of us.”

127 donors contributed toward the $8.2 million Kick-Off amount, leaving almost 600 more families to contact during the public phase of the campaign to reach, or even exceed, the entire goal of $14 million.