Washington, DC – The National Presbyterian Church of Washington D.C. recently celebrated the successful conclusion of a historic Capital Campaign that has raised $14.5 million.  The campaign planning began in the fall of 2017 with a 6-week Readiness Assessment where the ambitious plans for renovation and expansion were shared with the entire church family.  Over 500 adults attended one of the focus group sessions and voiced their approval of the master plan.  Shortly afterward the quiet phase of the campaign was launched and resulted in over $8 million raised by the time of the public Kick-Off in March of 2018.  The total announced at the Kick-Off represented just 15% of the congregation.  With over half the dollars already pledged, the congregation moved enthusiastically into the public phase of the campaign.  By June, over $13 million was pledged.  Diligent adherence to the personal visit strategy and follow-up with new members added the final $1.5 million leading to a final campaign pledge total of $14.5 million.

The campaign entitled, “Building Together for the Next 50 Years,” represents the most successful Capital Campaign in church history.  Pastor David Renwick believed that, “…now was precisely the right time for our congregation to rise to the challenge of committing and providing the financial resources needed to turn the plans into reality.  We have the opportunity to set the stage for the next 50 years.” 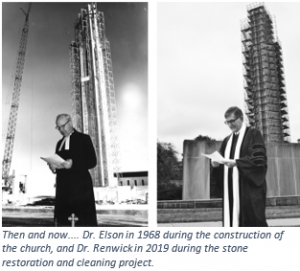 And set the stage they did.  The dollars raised will allow the church to complete much needed deferred maintenance on the historic campus as well as to improve the overall appearance of the campus while improving accessibility and traffic flow.  Additional rooms for Sunday School and Bible class will be added as well as improvements to the youth ministry areas and general office space.  In addition, the plan also dedicated $1 million dollars to mission work both locally and overseas.

Dr. Renwick added, “The highly relational approach to raising funds (using the Klote method) appealed to me and does so even more now that the campaign is complete.  A good campaign of any form builds not only buildings, but the body of Christ.  I have seen this happening.”

Co-chair of the campaign Bryce Pippert added his thanks for James D. Klote & Associates and campaign consultant Steve Siegel by saying, “We would not be here without your team.” Co-chair Ginny Taylor agreed and added, “We are so thankful for your guidance through this entire process. We couldn’t have done it without you.”