Restore. Renew. Rejoice! is the theme of the Capital Campaign, which held a Kick-off Celebration after the 10 o’clock service on Palm Sunday. Spring had sprung in Bleecker Hall, where over 200 enthusiastic adults and children were treated to a tasty box lunch and a festive cake. Entertainment included crayons for the children to color a sketch of the Church steeple, and the song “To Share” performed by the Children’s Choir.

David Ware and Hugh Jones, Chair of the Building Design Committee, described to the attentive audience the improvements to the treasured buildings which parishioners over the past 3 years have said are necessary to support St. John’s mission.

Ellie Perkins, Jr. Warden, announced that a new meeting room on the first floor of the Parish House will be dedicated to Emily and Carleton Lee, Rector at St. John’s for 30 years. It will be named the Lee Room. 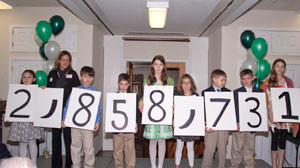