Cypress, TX – In 1848, 16 families from Posen Prussia made the long, arduous journey to settle in Little Cypress where they established a community and church in their newly adopted land. They gathered for worship services in private homes and built their first structure in 1853.

The people of St. John Lutheran Church and School have faced many challenges throughout the years, but have thrived to become a strong, prosperous congregation with many ministries and programs that influence the community and beyond.

In April 2016 during what is referred to as “The Tax Day Flood,” St. John was impacted when three of the six buildings on its beautiful campus were heavily damaged by flood waters. The leadership was determined to see this as an opportunity rather than a tragedy and took the time to study the best way forward. Instead of simply returning the buildings to their previous condition, they thoughtfully considered how to maximize the buildings for their current and future ministries. This led to the beginning of the Abundantly More Stewardship campaign to pay off existing debt, pay for the remodeling and upgrading of the damaged buildings, and expand the mission of the congregation.

After a series of congregational focus groups, the campaign began the Advance Phase, during which church leaders and a select group were given first opportunity to commit to the campaign. There was a growing excitement and anticipation of what God was doing as everyone prayed and worked toward the Kick-Off event scheduled for the end of August. However, on the day of the event, Hurricane Harvey hit the greater Houston area. The flood waters rose again and not only impacted the church campus, but 21 families were flooded as well. The church mobilized not only to assist with the needs of its members, but also nonmembers affected by the flooding in the community. The campaign had to temporarily take a back seat to recovery efforts. 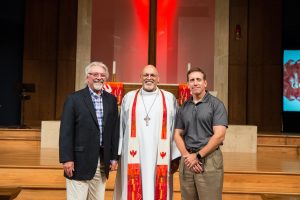 When campaign events could resume, a Celebration Sunday Kick-Off event was held on October 22, 2017. Darrell Wehlmann, chairman of the Mission and Ministry Council (church board), remarked to those assembled: “The thing that means a lot to me that I think is very exciting is that we are taking steps now through this campaign that will have an impact on future generations – folks we may never even meet.”

Co-Chairs Mark and Jean Froehlich and Jim and Linda Vogt shared the joy of revealing the amount pledged in the advance phase. There were audible gasps and then applause of praise as the Advance Phase pledges were revealed – and this, from just 11 percent of the congregation! The Advance Phase pledges had exceeded any campaign total in the church’s history. 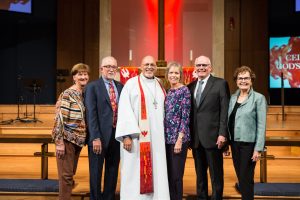 The Rev. Dr. David Bahn, Senior Pastor, said, “God’s abundance has been so evident in the history of our church. We’re seeing it today in the response of the people of St. John. All this is so that we may make disciples who celebrate, live and share abundant life with Jesus. We look forward to doing so with the people of the Cypress community for many years to come. This enables us to pursue our mission even more vigorously.” 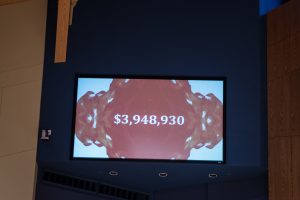 “We are delighted to be part of this outstanding campaign!  To already have pledges of $4 million in from only 11 percent of the congregation at this time is incredible!” stated Jim Klote, President of James D. Klote & Associates, Inc.

Each individual and family within the church will be contacted for a personal visit. The church is enthusiastic and optimistic about the present and future and the eventual success of the campaign, Bahn said.