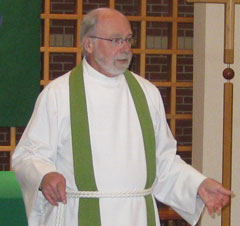 Middleton, WI – If you drove along Hubbard Avenue this past weekend, you may have found the typically tranquil sidewalks bustling with activity outside Middleton’s historic St. Luke’s Lutheran Church. Nearly 600 parishioners, literally ranging from newborns to 100 in age, filled the parking lots and streets outside the 117-year-old church to celebrate the official launch of the congregation’s “Let’s Go! … Forward in Mission” capital campaign to eliminate a $3.1 million mortgage.

Senior Pastor Roger C. Eigenfeld led the congregation in a festive kick-off event, featuring a guest jazz ensemble, stirring messages from various members, and complimentary refreshments for all. “Jaws literally dropped,” noted one participant, “when Pastor Roger announced that we already have more than $1,000,000 in commitments, before we have even started!” Dozens of campaign leaders were introduced, a special video presentation was displayed, and the sense of both history and energy were strong in the air.

“St. Luke’s has a history of stepping up to the plate,” stated Adrian Schoonmaker, the resident James D. Klote & Associates Campaign Director, “and they burned the mortgage once, back in 1988. They can do it again!” Church member Tim Carey spoke from the microphone, “This capital campaign is not just about debt reduction, but instead about cleaning up our house and making room for future investments in ministries, music, outreach, and education. … I’m all in!” 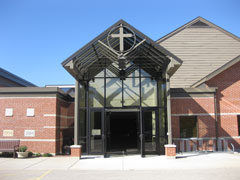 Campaign Spiritual Emphasis Chair, John Murray, addressed the church, “This congregation opens its doors to all … St. Luke’s raises the bar every year… The Lord is at work here. I know it, I can feel it, I am living it!” Another donor added, “I’m 100% committed to participating in this campaign, because it’s way beyond a mortgage. It’s the future of the church, and really that money is going to programs and missions and the ongoing vitality of the church.”