Following some very positive vision planning events this spring, Liberty Baptist Church and Newport Christian School moved forward into a Capital Campaign to fund the vision for updates to the auditorium, a new secondary wing for the school, debt retirement on the existing school buildings, remodeling in the community center for the Spanish ministry, and a special mission project. 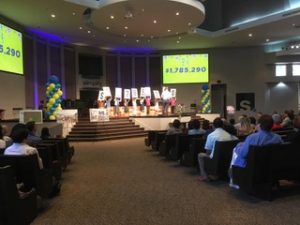 The $6 million in total needs for this Capital Campaign will improve the entire campus for decades to come, provide much needed classroom space for the growing school enrollment and will free up significant cash flow for future projects by being debt free.   About 15% of the church and school family agreed to make an early commitment to the campaign in time for the Kick-Off celebration.  Those 55 families have already committed over $1.75 million over a three-year pledge period.

During the Kick-Off service, Pastor Ryan Thompson noted that previous fundraising attempts usually netted about $200,000 a year, or about $600,000 over three years with the entire congregation involved.  “Today, with just 15% of the congregation involved we’ve already raised three times that amount,” Thompson said. 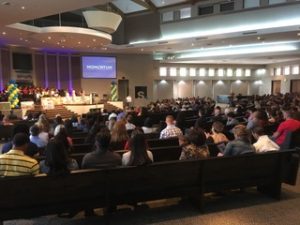 e campaign has launched publicly, volunteers will be meeting personally with families from both the church and the school in order to obtain the remaining pledges.  Campaign Co-Chair Keith Gilbert was encouraged by the progress so far and expressed thanks to campaign director, Steve Siegel and James D. Klote and Associates saying, “Thank you for all of your help to date.  You and your firm, along with God’s help, have taken us farther than we have ever gone.  With the current excitement and Momentum, we can achieve our goal!”