Honor the Past; Live in the Present; Prepare for the Future 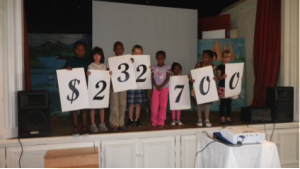 Announcement of the amount raised!

Oakland, CA “St. Paul’s Episcopal Church celebrated the kick-off of a five-year capital campaign with a festive lunch on October 23, 2011. With over one hundred parishioners and guests in attendance, campaign chair, Doug Jensen, and The Reverend Mauricio J. Wilson addressed the challenges the church currently faces as well as new programs oriented toward future development. The congregation is currently celebrating its 140th anniversary and its 100th year at its current location on Lake Merritt.

Speaking of his family’s experiences in Costa Rica, Reverend Wilson noted that each generation strives to make life better for their children. As inheritors of a rich architectural, musical, and spiritual tradition, the current parish is called to leave St. Paul’s stronger than they found it.

We’re a diverse group of people who come together in a place that’s beautiful and full of God’s spirit, he said. The future is ripe with great potential and possibilities for our parish. 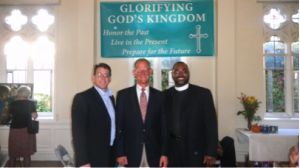 Doug Jensen followed with a brief overview of the current needs of the church facilities and also a view of how St. Paul’s will expand its ministry through programs and outreach. Urgent issues revolve around heating and work on the church’s faÃ§ade as well as electrical wiring and repair of the magnificent Austin organ. St. Paul’s vision is to implement youth and feeding programs and to increase annual giving to cover all regular church expenses.

Citing recent growth and diversity in the parish, Jensen noted that, This is an excellent time to take advantage of the excitement and enthusiasm to move St. Paul’s forward. This capital campaign will deepen our faith.’

With the help of the children of the congregation, the campaign committee announced that it had already raised $232,700.00 in funds. This is an excellent start to fundraising efforts.