First Church of Dallas Kicks Off “LOVE First, DEEP in the Heart of Dallas” Capital Campaign with Over $6 Million Raised!

Dallas, TX – On Saturday, February 4, at 6 p.m., the doors opened to the beautifully decorated Rosine Hall inside The Arboretum of Dallas to celebrate the First Church of Dallas’ “LOVE First, DEEP in the Heart of Dallas” Campaign Kick-Off Event. To set the mood, live music was provided all evening.

The program opened by Rev. Dr. Daniel Kanter, Senior Minister, welcoming the crowd of 600, a record gathering, and thanking those instrumental in creating the event, followed by a prayer by Rev. Beth Dana. Campaign Co-Chairs David Norton and Sherri Cook took over from there to set the tone for the rest of the program. 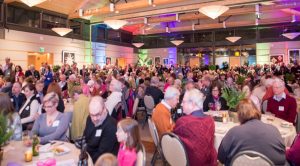 View of 600 guests from the stage

Prior to the program and afterwards, attendees dined on an array of meats, seafood, fruits and vegetables further complimented with scrumptious deserts while sitting at wonderfully adorned tables with tablecloths, floral arrangements and place cards. Servers swarmed the tables and floor to everyone’s beck and call while serving guests their favorite beverages.

Drenched by the beautiful mood lighting in the room, David Norton introduced Rev. Dr. Laurel Hallman, Minister Emerita and guest speaker, for a very moving speech. An amazing past was remembered leading up to the next speaker, Rev. Dr. Daniel Kanter. He took the baton and spoke of the vibrant present and finished by framing an amazing strategic plan revealing beautiful future dreams for which the campaign was created to fund.

Campaign chairs, David Norton and Sherri Cook, accompanied by 10 youth members holding story boards featuring the strategic future plans and building renderings followed. A drum roll began while Sherri asked the youth to begin flipping their boards over one at a time. From right to left, the campaign pledge result 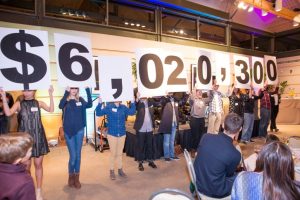 was revealed, $6,020,300, sixty percent of their goal! Energetic visitor volunteers and gracious contributors successfully closed the Advance Phase. There was a huge amount of excitement. One member overheard in the crowd, astounded with the pledge amount stated, “I thought the amount would be less than half of what was announced.

First Church initiated their $10,000,000 Capital Campaign to embark on a strategic plan following their mission and equally splitting the initiative between internal community growth and external growth in community outreach to continue their 117-year legacy.

Rev. Kanter, excited about the campaign results stated, “This is an exciting time for our church as we continue our long history in Dallas as a progressive voice for compassion and justice. We started this 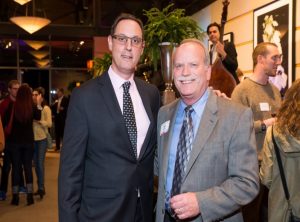 campaign to build up a stronger community and serve the DFW area in new ways that will impact thousands of people over the next few years. We would not have been this successful without the aid and guidance of James D. Klote & Associates.”

Associate minister, Rev. Aaron White eloquently closed the program toasting church leaders, volunteers and the congregation for their roles in this historic initiative and celebration.