First Baptist Church Kicks off Capital Campaign “Honoring Our Past, Continuing Our Legacy”

Morehead City, NC – On Sunday June 12, following a combined church service replacing their regularly scheduled traditional and blended services, the doors were opened to a beautifully decorated Family Life Center to celebrate the Capital Campaign Kick-Off. Special opening music was provided by the FBC Worship Team, followed by a campaign prayer by the Rev. Jimmy Rivers. Associate Pastor Rev. Darrell Williams followed with a special welcome and thanks to the crowd; just shy of 300 members attended.

Dr. Nate Leonard addressing the hundreds of members who attended the Kick-Off celebration.

Prior to the program beginning, attendees dined on fried chicken, smoked ham, an array of vegetables and deviled eggs, topped off with scrumptious deserts while sitting at wonderfully adorned tables with white tablecloths, flowers and balloons.

Beautifully printed programs at each place setting contained not only the information to follow, but the campaign prayer and passionate letters from Senior Pastor Dr. Nate Leonard, Campaign Co-Chairs Jeff Williams and Patricia Latham. Servers swarmed the tables to everyone’s beck and call while serving guests their favorite beverages.

Preston Garner, campaign steering committee Advance Phase Chair offered a synopsis of what led the church to this very day. Jeff Williams, steering committee Co-Chair, stated “My Co-Chair, Patricia Latham, and I are humbled, honored and excited about leading this significant effort.” Wanda Bennett, Pattern Phase Chair stood before the full room to speak briefly of the “exciting challenges before them.”

Lee Dixon, Victory Phase Co-Chair then took the stage accompanied by a drummer who would soon execute a true rumbling drum roll to announce what had already been pledged to the campaign. Eight children, one by one, came on stage to reveal each number of the total on individual placards. There was much excitement when the results were announced. One member overheard in the crowd was astounded with the total pledge amount stating, “I thought the amount would be only a tenth of what was announced!”

First Baptist Church Morehead City initiated their capital campaign to embark on their fourth large building and restoration program in the last 6 decades of a church celebrating a rich 143-year legacy founded by ten members who took a leap of faith. This one will be by far their most significant effort. 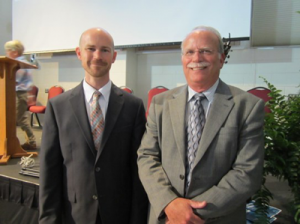 When Jim Collins was asked what he felt about the celebration, he stated, “I have not seen a group of leaders work any harder than FBC’s nor have I been a part of such an efficient, well planned Kick-Off celebration succinctly conveying the right message to the church family!”