Church of the Redeemer Celebrates and Announces Ground Breaking Date

Sarasota, FL – On November 5, Church of the Redeemer Episcopal Church celebrated a milestone in its Capital Fundraising Campaign. More than 300 parishioners, civic leaders and neighbors gathered at the 125-year year old church to mark having reached its fundraising goal to expand the downtown Sarasota church by raising well over $5.1 million.

“Reaching this milestone is a tremendous achievement for our parish and the greater community,” said The Reverend Fred Robinson, Rector of Church of the Redeemer. “These new and enhanced facilities will accommodate the growing number of people who are attracted to this community of faith. We will have more classroom space for Christian education for adults and children, more room for our choirs and the growing music program and more efficient work spaces for our staff.”

The first one of the three phases of the church’s expansion will begin Spring of 2018 and is expected to take 12 months. More than 17,000 feet will be added to the existing footprint of the church, bordered by Palm Avenue, Ringling Boulevard and Gulfstream Avenue.

Added Capital Campaign Chairman Robert A. Morris, Jr. said, “We nurture our parish and community with more than 100 active ministries. We need the proper infrastructure to support these important programs. The parish and the community have risen to the call and challenge to love our neighbors and ourselves. Our new spaces will give us the resources to continue doing that.”

The Church of the Redeemer began as a worshipping fellowship of Episcopalians in the mid-1880s. By 1904, the Sarasota congregation had 26 communicants, a building of its own and was officially recognized that year as a mission of the missionary district of South Florida. Redeemer was admitted with parish status at the Diocesan Convention in 1934. After three moves, remodeling, and additions to accommodate a growing congregation, the church’s location was fixed at the corner of Orange Avenue and Morrill Street. By 1944, the current property was purchased for the construction of a new church. The first services were held in the new church on Friday, 17 March 1950. Additions of a parish hall and church school building were completed in 1953-1954. 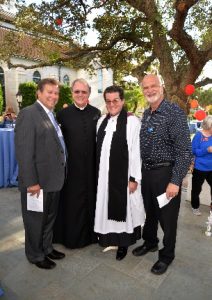 Glendon Smith, the Campaign Consultant with James D. Klote & Associates, who was hired to direct this campaign said, “The growth of the church is in keeping with the growth of the parishioners and ministries; their moto is: Redeemer is in the Heart of the City, and has a Heart for the City.”