Laredo, TX – Christ Church Episcopal kicked off its “A Faithful Past – A Future Foundation” Capital Campaign with a dinner event filled with great anticipation.  Rector Paul A. Frey spoke about the theme and challenge to a capacity crowd of members and friends of the church.  The events keynote speaker, Dr. Ray M. Keck III, spoke clearly of the rich history and love of the church and what a tremendous opportunity is before us. 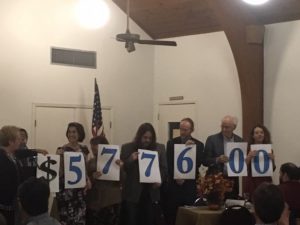 Senior Warden and Co-Chair of the campaign, Jim Moore, noted that, “As we entered this momentous challenge, I was uncomfortable.  The unknown was the biggest hurdle facing us.  However, the cohesiveness and excitement exhibited within the steering committee and other campaign chairs was contagious as we moved forward.  Our campaign director trained and reassured us we could accomplish our goals.  Our folks calling on fellow parishioners began to report the positive attitude among the parish once the campaign goals were delineated and supported with ‘good’ research at our weekly meetings.  At the Kick-Off dinner, when we reported the initial pledge total of 58% of our need, excitement and absolute shock was evident among those present who had pledged and those who were ‘waiting’ to pledge.  To say we were invigorated was an understatement.  The future is ahead and attainable!!!!”

Rector Paul A. Frey remarked that, “The first five weeks of our Capital Campaign has exceeded my expectations. With only 17% of our households having pledged in the advance phase, we have far exceeded anything we’ve done in the past with over $577,000 of the $1,000,000.   Equally exciting is the positive spirit in the congregation. People are energized and encouraged. I believe that the support of our campaign director has been instrumental in us getting this campaign off to an amazing start.  I am so grateful for the personal and professional attention we’ve received from Glenn Wagner of J.D. Klote and Associates. That too far exceeded our expectations.”