Cincinnati, OH – Over 250 members and friends of Christ Church Cathedral turned out Friday night for a very special parish dinner. Its purpose was to initiate a fund-raising campaign for the renovation of their Cathedral and Chapel, along with a new Christ Garden and Cincinnati Scholar House. Located on the corner of Sycamore and Fourth Street in downtown Cincinnati, this church began its ministries in 1817. Not only is it a resonant space for Episcopal worship, but the church has traditionally provided a home for a variety of inner-city social service groups.

In keeping with the church’s history, the theme of Christ Church’s multi-million-dollar campaign is: Living the Vision. The work to be done, including improvements to the Centennial Chapel through new heating and air conditioning, renewing the space and making it more accessible, will benefit not only the congregation, whose numbers continue to grow, but also the many organizations that meet under that roof. The Chair of the event was Mary Hagner, who pulled off this event with her devoted team in such a short period of time. Senior Warden, Jane Page-Steiner shared her appreciation to the Vestry, clergy, staff and all the committees who serve at Christ Church. As evidence that the stated goal is within reach, Campaign Chairman Dr. Frank McWilliams, on behalf of the campaign’s steering committee announced the astonishing news that $3M had already been raised.

Contributing to the excitement of Friday’s event at The Phoenix, Cathe Dykstra the CEO of Family Scholar House in Louisville, KY delivered the main address. She emphasized the “vital place” that Christ Church holds in the community, the “phenomenal scope of its ministries, and the presents of the Holy Spirit in their midst these past 198 years.” She shared a moving video depicting graduates from the Scholar House whose lives were changed as single parents in a struggling life. Frank told Cathe afterwards, “You lit the fuse of energy for achieving our goals!” Remarks were overheard that the dinner provided a “great chance for parishioners from all worship times to enjoy good food, have fun and fellowship together.” 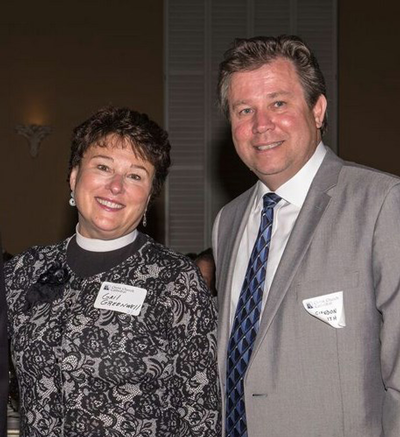 Glendon Smith, the Campaign Director said “We have raised nearly 8 times their annual giving from less than 15% of the members! This is such a wonderful group of people, and Cincinnati is so great, that I will be sad to leave when this campaign is finished.” The campaign, which is scheduled to wind up at the end in November, is being conducted in conjunction with the church’s regular annual appeal. It commenced with a series of focus groups in which the Dean, The Very Rev. Gail E. Greenwell, asked parishioners, “What is God entrusting to us in this time and place?” Their answer is now clearly seen: to unite in prayer and to renovate the church so that, from this strengthened base, they will become a resource for hope and transformation in Greater Cincinnati and beyond. Rev. Greenwell continued, “There is so much excitement and I know the visits will be just that much more enjoyable and successful.”