Best Capital Campaign Ever … and it’s only the kickoff!

Carmel, IN – Carmel Lutheran Church kicked off its Hearts Compelled To Share capital campaign in record style. As of January 25th just 73 families of the more than 900 in the church had already committed $3.75 million dollars. That total represents not only the best kickoff to a campaign at CLC, it also represents the best campaign in total even though only 8% of the congregation has pledged so far. 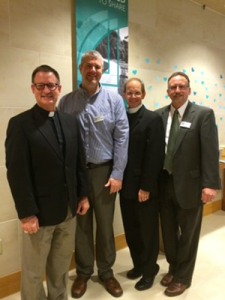 The previous best campaign was just four years ago when CLC collected a total of about $3 million in pledges from over 425 donors. Pastor Luther Brunette, Senior Pastor at Carmel Lutheran, said, Not only has this been the most successful campaign I’ve been a part of in my 20 years at CLC, but it has also been, by far, the most positive. 1,500 disciples attended the weekend services to help kickoff a campaign to raise funds for the purchase of land and the completion of Phase I of a facility that will function as an additional ministry site in the nearby Fishers community. The site will feature a 34,000 square foot facility that will duplicate the high quality worship and educational services already offered at the Carmel site. Staff, technology, equipment, and many services will be shared between the two sites. 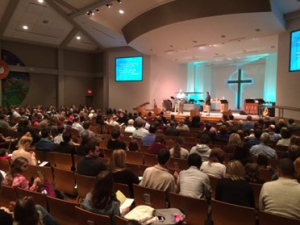 One of 6 kickoff services held the weekend of January 24 and 25.

Pastor Scott Giger, Pastor of outreach and discipleship, said that CLC’s commitment to a vision for multi-site ministry is what motivated him to move here from another church in Ann Arbor, Michigan a year ago.The fact is, Giger said, Carmel Lutheran is already a multisite ministry since we have two separate facilities for both traditional and contemporary worship on the same property. Now, we’re just adding a third site that happens to be about 25 minutes away in one of the fastest growing communities in the Midwest. The mission opportunities are incredible. 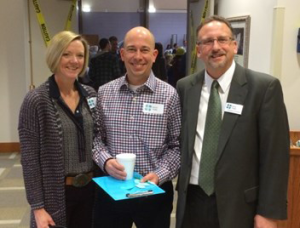 Co-chairs for the campaign are Kevin and Sheri Robb who are also very excited about the opportunities that a successful campaign will bring to Carmel Lutheran. Our goal, Kevin Robb said, is not only to pay for the land and the new building in Fishers through this campaign, but also to retire the existing debt still held on the Carmel site.

The leadership really stepped up for this early part of the campaign, Robb said. Now we’re looking forward to extending that personal visit strategy Klote brings us to the rest of the congregation. If we all work together, we can do this.