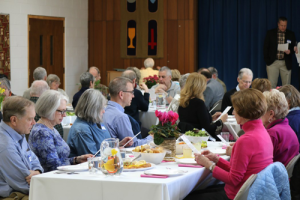 CONNECTIONS . COMMUNITY . CHRIST is the theme of the campaign, which kicked off the evening of March 22nd. Dining tables in the Fellowship Hall were brightly decorated with floral arrangements of the season. Nearly one hundred members filled the Hall, enjoying salmon and chicken dishes served family style by Geppetto Catering, a locally recognized leader in environmentally friendly food service. Campaign Co-chairs Cheryl and Bill Amick served as the Masters of Ceremonies. They greeted the celebrants and opened the festivities in a unison reciting of the campaign prayer.

Following dinner, the Campaign’s Spiritual Coordinator, Dale May, introduced several of Darnestown’s most beloved and colorful members to share their favorite Darnestown Presbyterian moments. They were diverse, to say the least. Dale, in his turn, spoke of the powerful moment when his daughter served him commune for the first time. As he concluded the Favorite Moments portion of the program he reminded everyone that memories are wonderful to have, but The campaign and tonight are about expanding our ministry.

Pastor Dave McNeilly borrowed from the typical Sunday service to explain the need and importance of conducting a capital campaign in a simple and powerful way. He called onto the stage the many children present to deliver a Children’s Message. œDo you know why we are together tonight? he asked; To solve a problem. Using a white board and simple drawings, he explained to the children that Darnestown Presbyterian’s needs to expand worship and fellowship space. He asked the children if they knew who built their church; they didn’t. œNo one really does. And in fifty years when your children’s children are sitting here, they won’t know who expanded the church, either. But, He will. The symbolism combined with the simple message of faith had a powerful impact on children and adults, alike. 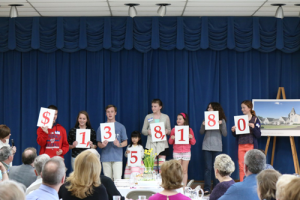 As the event’s program was coming to a conclusion, Bill and Cheryl assured attendees that CONNECTIONS . COMMUNITY . CHRIST volunteers have been working diligently in advance of the kick-off to get the campaign off to a solid start. With help from the children, Cheryl announced that over $1.3 million in pledges had already been received. The news of the extravagant generosity of initial pledgers was met with an enthusiastic response. The evening came to a conclusion with a prayer composed and read by Barb Dear. Campaign Coordinator, Wayne Spaulding of James D. Klote and Associates summed the evening up when he observed, I think they came with open minds and left with open hearts. That’s a pretty good night.