Kirkwood, MO – Approximately 400 members and friends of Concordia Lutheran Church gathered on Thursday night for a very special Summer Celebration. Those in attendance viewed pictorial memories from the congregation’s rich history and listened to music while visiting with other members and enjoying drinks and hors d’oeuvres. Located at 505 S. Kirkwood Road in a suburb of St. Louis, this church began its ministries in 1874. Not only a resonant space for Lutheran worship, the church has traditionally provided a home for a variety of community groups.

In keeping with the church’s history, the theme of Concordia Church’s multi-million-dollar campaign is: OUR NEXT STEP. The work to be done, including improvements to the campus through a new Center for Christian Education building, increased parking and making it more accessible, will benefit not only the congregation, whose numbers continue to grow, but also the many organizations that meet under that roof. The Co-Chairs of the event were Dean & Erica Eggerding, who pulled off this event with their devoted team in such a short period of time. Ron Laudel, Church Council President shared his appreciation to the many council members who serve at Concordia Lutheran. As evidence that the stated goal is within reach, Campaign Advanced Co-chairs, Ron & Sharon Burkhardt shared on behalf of the campaign’s steering committee announced the astonishing news that $4.6M had already been raised from only 115 families. 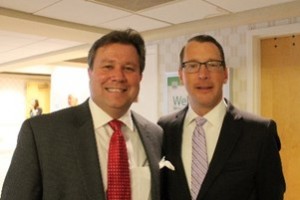 Contributing to the excitement of Thursday’s event at The Route 66 Holiday Inn Cadillac Ballroom was Rev. Dr. Gregory Seltz, speaker of The Lutheran Hour, who delivered the main address. He emphasized the “vital place” that Concordia Church holds in the community, the “phenomenal scope of its ministries, and the presence of the Holy Spirit in their midst these past 142 years.” He shared a moving speech depicting past Senior Pastors from the church whose lives changed others in a struggling life. Afterwards, members were heard saying, “Dr. Seltz lit the fuse of energy for achieving our goals!” Remarks were also overheard that the celebration provided a “great chance for members from all 5 worship services time to enjoy good food, have fun and fellowship together.”

Glendon Smith, the Campaign Director said, “We have raised over twice what they have ever raised in the past from less than 14% of the members. This is such a wonderful group of people, and Concordia is so great, that I will be saddened to leave when this campaign is finished.” The capital stewardship campaign is scheduled to wind up at the end of 2016.

It commenced with a series of focus group meetings in which Pastor Seidler asked the congregation, “What is the Holy Spirit placing on your heart for Concordia’s future ministry?” Their answer is now clearly seen: to unite in prayer and to renovate the church and build a Center for Christian Education so that, from this strengthened base, they will become a resource for hope and transformation in Greater Kirkwood and beyond.