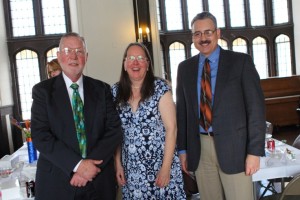 Urbana, Illinois Wesley Foundation at the University of Illinois and Wesley United Methodist Church celebrated the official beginning of the second century fund raising drive; the Wesley Capital Campaign kicked off with a brief program and light lunch in the Wesley Great Hall.

Inspiring Students, Transforming Lives, and Enriching Our World with Christi’s Love is the theme of the Capital Campaign, which held a Capital Campaign Celebration luncheon on February 3rd. Even with the kickoff of Super Bowl XLVII just hours away, Wesley’s Great Hall was filled with over 130 members, students, friends and alumni who were treated to a light lunch selection of salmon, chicken salad or a vegetarian dish. Refreshments and a variety of cookies topped off the noontime meal.

Before lunch was served a brief program was presented. Wesley Pastor and Foundation Director, Dan King Crede, welcomed and led the attendees in the Campaign Prayer. Campaign Chair Susan Haney thanked the various volunteers who make up the Campaign’s Steering Committee and reflected how important Wesley has become to her and her husband over the past twenty years.

The Reverend Doctor Miley E. Palmer is the Campaign’s Honorary Co-Chair. He was asked to provide the Celebration’s keynote address. What an inspired selection it was. To the delight of his many friends and those who had only heard of his skills from others, Miley summed up the significance of the Campaign to Wesley and the importance of participating to the assembled by asking, Why do we give?

There are four reasons according to the former Wesley Pastor and Foundation Director.We give because we need to; it’s in our nature, he shared. The second reason is that we have been so surprised by grace, we want to share. Our desire to make a differencealso inspires giving. And finally, we give because we want to make an investment in the future. The warm, enthusiastic response Wiley’s remarks received are testimony to how deeply he reached his audience. 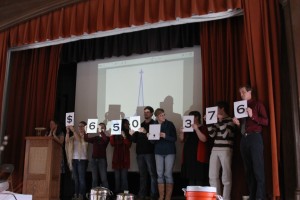 Chairperson Susan Haney then spoke of her own sacrificial gift and encouraged others to give generously and lovingly. There was a collective gasp of surprise, disbelief and joy when Susan revealed that a small number of Wesley supporters had already pledged over $650,000 in support of the campaign.