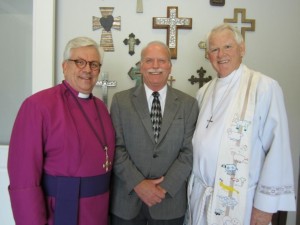 Father Dale Chrisman, Rector at Trinity opened the celebration with a grand welcome followed by prayer before Bishop Clark Lowenfield, Diocese of the Western Gulf Coast, led the congregation and visitors outside for a traditional new church dedication.

The “At the Front Door” ceremony began with Bishop Lowenfield knocking three times on the door with his pastoral staff saying, “Lift up your heads, you gates, and be lifted up, you everlasting doors, and the King of Glory shall come in.

The congregation loudly yelled, “Who is this King of Glory?” Bishop Lowenfield answered, “It is the Lord, strong and mighty, the Lord mighty in battle. The Lord of hosts, he is the King of Glory.”

The door was opened whereby the congregation and visitors were led back into the church for the remainder of the service and acknowledgement of those many people and companies who aided Trinity Anglican Church in their full circle from plant to campaign and finally into their new building. 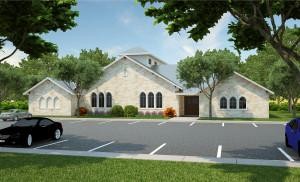 Among those companies recognized was James D. Klote and Associates represented by Jim Collins, capital campaign director for the company, who facilitated their capital campaign beginning in March of 2014.
Rev. Chrisman stated “Although the church had come a long way since its founding, there was much more to accomplish; this was only a new beginning.”

The service was followed by a reception also held in the fellowship hall while many guided and self-guided tours took place to view the beautiful classrooms, nursery and the grounds.

Only four and a half years ago, the dream to move from their rented building into their own church home began to manifest into reality as research commenced to find land and contact professionals to aid in development. Land was purchased, a builder and architect were engaged and plans were made.

Only two and a half years ago, James D. Klote and Associates conducted a feasibility study leading to a capital campaign, which with the help of congregants’ many sacrifices, transformed dreams into the reality of the building they celebrated today.