The Church of The Cross Kicks Off Campaign with $7,500,000 Already Raised!

Bluffton, SC – The Church of the Cross and Cross Schools jointly launched their Capital Campaign, The Present for The Future at the church’s Annual Meeting. The family friendly dinner was an evening of music, prayer, and a visionary look at the future.

January 16th was a mild winter’s day in the Low Country with the kind of sunset that encourages visions of the spring to come. Nearly seven hundred members, families, friends and supporters of The Church of the Cross and Cross Schools came out that evening along with The Rt. Rev. Mark Joseph Lawrence, Bishop of the Diocese of South Carolina, to hear The Very Rev. Dr. Charles E. Owens, III share his vision for the future of the dioceses largest church. Presentations were preceded by a formal, catered dinner prepared and donated by Downtown Caterers.

The evening’s festivities were held on the Cross Schools campus where a large, luxurious tent was erected adjacent to the school’s “praise-nasium” to accommodate the overflow crowd attending the largest gathering ever conducted on the school grounds. Father Owens did not disappoint. He spoke with passion and conviction about the enormous growth the low country was experiencing with the construction of a mega-port in the Savannah River; the thousands of new families that would arrive to fill new, information age employment opportunities at the port; and how very few of them will have heard the Good News of Jesus Christ. 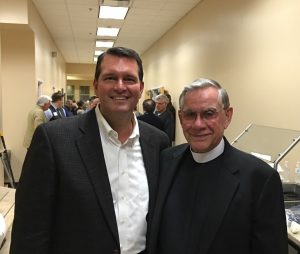 Jim Klote with Fr. Chuck Owens at the Kick-Off Event

Father Owens has heard the calling. The Church of the Cross must be ready to reach out to these new arrivals in ways they need, where they are. His vision is to purchase land for new ministries, enlarge the worship space and add class rooms for grades 9 – 12 at Cross Schools, and establish a trust fund for long term facilities maintenance.

“The vision is ambitious,” conceded Father Owens, “and the estimated budget for completion is $15 million.” But before the cost could chill the enthusiasm and excitement among the assembled, Father Owens revealed that a hand full of patrons, leaders and friends with the help of James D. Klote and Associates, had already raised $7.5 million. “It’s up to the rest of us to each pick up a pebble, a rock or a boulder so that we can move this mountain that is before us,” Father Owens challenged to a rousing, spirited ovation.

The evening, after several songs of praise, came to a conclusion with a reciting in unison of the campaign’s prayer. Campaign Director for Klote & Associates, Wayne Spaulding summed the evening up when he observed, “Vision generates powerful motivation; passion inspires action and unite of purpose can accomplish anything. Those are the lessons people are leaving with tonight.” It was, indeed, the kind of evening in the low country that lets you dream of what spring will bring.