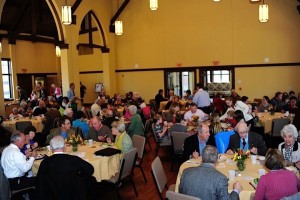 Faith, Family and Future Initiative is the theme of the campaign, which kicked off after services on the afternoon of November 9th. Parish Hall was brightly decorated in seasonal colors and filled to near capacity as over 130 members, friends and guests came together for a luncheon of glazed ham and yummy desserts. The meal was prepared by the St. Thomas kitchen angels. Former Junior Warden, Jack Buchholz, served as the Master of Ceremonies. Jack opened the festivities by leading the celebrants in the Future Initiative prayer, composed especially for the campaign.

Father Darren Elin, St. Thomas Rector, was impressed with the spirit and sense of comradery present in Parish Hall; There is a strong sense of community here; St. Thomas is such a special place. Campaign Co-chair, Vern Thomas, echoed this sentiment, At any other place this would be just another themed luncheon, but here it is a celebration of our purpose: To make God’s love known by who we are, what we practice and how we serve others in Christ’s name. 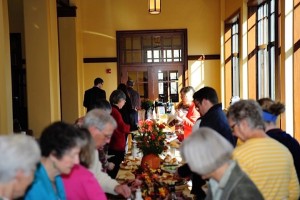 The Buffet at the Kick-off Event

Father Bob Reynolds offered inspirational remarks about the challenges ahead and the congregations tremendous record of overcoming adversity and emerging from them stronger and more united. He drew parallels from his own experiences and shared the lessons he has learned from them. As a beloved member of the St. Thomas congregation and a trusted leader, the audience responded to Father Bob’s encouragement with a warm, sustained ovation. 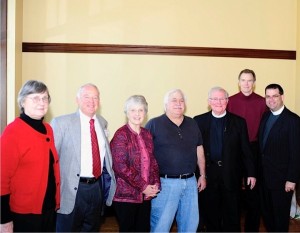 As the event’s program was coming to a conclusion, Jack Buchholz shared that the Faith, Family and Future Initiative has a target of raising $2.5 million to support maintenance of facilities, endow the Youth and Family Ministry position and purchase a new organ. He assured attendees that Initiative volunteers have been working diligently in advance of the kick-off to get the campaign off to a solid start. With the help of children from St. Thomas several youth music programs, Music Director, Carlton Monroe announced that $776,500 in pledges were already in hand. The news was met with an enthusiastic response.