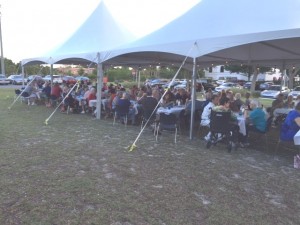 Lake Mary, FL – St. Peter’s Episcopal Church launched its 2016 Church on the Hill campaign with a special Saturday night tent revival barbeque. The family friendly dinner was an evening of prayer, testimony and a “fly around” the proposed new church building.

Church on the Hill is the theme of the campaign, which kicked off on the lovely spring evening of April 23rd under a twin spired tent located in the center of the hillock that will serve as the home of St. Peter’s new church. Dining tables were brightly decorated with floral arrangements.

Two hundred members wearing buttons that asked, “Are you praying?” enjoyed pulled pork, barbequed chicken and all the fixings. Sony’s Barbeque, an area favorite for generations, catered the event. Father Charlie Holt, St. Peter’s Rector, greeted the celebrants and opened the festivities in a unison reciting of the campaign prayer.

Following dinner, Father Charlie introduced several of St. Peter’s most beloved and colorful members to share the importance of St. Peter’s in their lives. Cade Pope shared that through prayer he realized God’s will guides our efforts. “Trust in God, Act in Faith,” was his conclusion. Ada O’Neil repeated her often stated approach, “I have prayed for this church to be built for thirty years.” 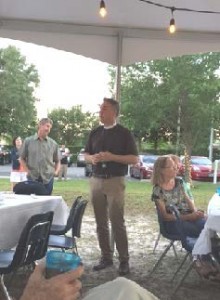 A highlight of the evening was the presentation of the architect’s 3D rendering of the proposed church on the existing campus. Through the marvels of computer aided design, attendees were treated to a trip around the campus. They saw how the new church will blend with the existing architect and were thrilled to see the skyline dominated by the new steeple.

As the event’s program was coming to a conclusion, Laurie Mealor, Campaign Chair, thanked campaign committee members for their efforts and assured attendees that Church on the Hill volunteers have been working to get the campaign off to a solid start. With help from the children, Laurie announced that over $617,000 in pledges had already been received. The news of these generous initial pledgers was welcomed with warm applause of gratitude. The evening came to a conclusion with prayer lead by Father Charlie. Campaign Coordinator, Wayne Spaulding of James D. Klote and Associates summed the evening up when he observed, “Who would have thought that a tent revival barbeque would have generated so much enthusiasm and optimism? The evening seems to have caught and roused the congregation’s spirit.“