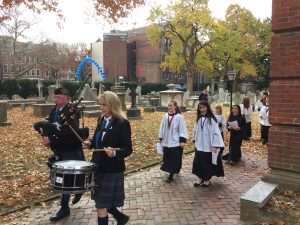 Philadelphia, PA – St. Peter’s Episcopal Church celebrated the public launch of their $15 million Capital Campaign “OPENING DOORS…Building the Future of St. Peter’s Church” with a festive brunch on Sunday, December 3rd.  The campaign has raised $5,250,000 which is already 5 times the annual giving of St. Peter’s. Following the 11:00 a.m. service, a bagpiper accompanied by a drummer led the congregation three blocks to the Episcopal Community Services building for the festivity. In referring to construction of the proposed Parish House Rev. Claire Nevin-Field, Rector, commented, “God is always beckoning us to live more fully into who we are and to dream new dreams, to serve in new ways.”  Kathleen Stephenson, Campaign Chairperson, observing that the new building is St. Peter’s first significant building project in over 250 years, concluded her remarks with “It is time!”