St. Alban’s Night Under the Stars Launches Our One Foundation Capital Campaign 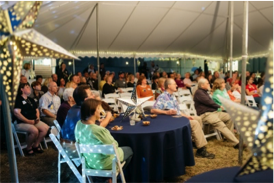 Waco, TX – The stars in Texas’ night skies are “big and bright,” or so the old song goes. But the big stars in the heart of Texas were under the tent on October 23. Nearly 150 people attended the Kick-Off event for the Our One Foundation Capital Stewardship Campaign at St. Alban’s Episcopal Church. At “A Night Under the Stars: A Chance to Dream,” large, pre-lit silver stars sparkled from every tabletop and along tent edges for the festive evening. Guests were treated to live music, heavy hors d’oeuvres, and drinks.

The Our One Foundation campaign goal is to raise enough money to enable the church to begin the first phase of a four-phase building and renovation plan on St. Alban’s campus over the next ten years. It is the first major fundraising campaign for the church since 1996, when parishioners raised $1.5 million to renovate the church, Parish Hall, school, and offices. 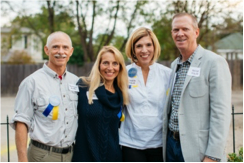 David Tekell, Co-Chair of the campaign’s Steering Committee, gave a brief recap of the work that led to the vestry’s endorsement of the Capital Campaign. Tekell, who Co-Chairs the committee with his wife, Angela, and with Stewart and Tracy Kelly, also discussed what the reimagined campus space might look like.

Special guest was the Rt. Rev. Jeff W. Fisher, Bishop Suffragan of the Diocese of Texas, and the 10th rector of St. Alban’s. He said he was honored to be at the event for three reasons: to represent the Diocese, to return as the former rector, and to share a personal word.

He assured the people of St. Alban’s the Diocese stands with the church saying, “Every parish in the Diocese has had to make the decision at some point in time to hold a Capital Campaign. I want you to know you are not alone in this endeavor.”

As rector of St. Alban’s from 2006 to 2012, Fisher spoke of the many times he saw God’s work in the parish. “If the walls of my office could talk, they could tell you stories of lives, marriages, and children saved—all by the grace of God.” 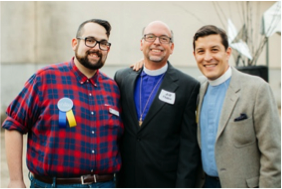 On a personal note, Fisher told the congregation the impact the church has had on his own family, noting his sons’ current involvement in ministry. “It is because of the spiritual impact you have had on the life of my family and on their behalf that we make this donation to your campaign,” he said, handing his pledge card to the current rector, the Rev. Aaron M. G. Zimmerman.

The festivities included a video about the campaign and words from Mrs. Margie Allen, who attended the first service at St. Alban’s as a 9-year-old girl in 1946. “At first I wasn’t happy about coming here. I left a wonderful church (St. Paul’s) where we had the most fun at Sunday School. Here, we had Sunday School on a porch,” she said. It didn’t take her long, though, to grow to love this new church. “It has meant the world to me,” she said. 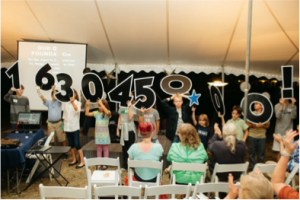 A highlight of the evening was when several children took the stage holding two-foot tall numerals. They scurried around, stopping at one figure and another, until settling in the correct order of the pledges already made during the Advance Gifts Phase of the campaign.

Rev. Zimmerman, with the help of the future generations of St. Alban’s, announced the church has raised $1,630,450 from just twenty-seven households. These pledges already surpass the 1996 total, giving this campaign significant momentum as it heads into its broader visitation phase.

The public visitation phase was set to begin in earnest the following day and will continue through the end of 2016. Rev. Zimmerman told the attendees, “The goal is to visit with each parish household, allowing every person to have the opportunity to learn about the positive impacts the plan possesses, so they can best decide how they might support the future work at St. Alban’s.” It was heard throughout the evening how this is St. Alban’s time to build upon the foundational legacy that exists and extend on Our One Foundation for the sake of our future, for our children’s children.

As the night drew to a close, Rev. Zimmerman stood on St. Alban’s Great Lawn in front of Waco Drive, speaking these words, “Cars have been driving by us all night. Each one represents a person or family we’d like to welcome to this church. This campaign will create a campus they can’t ignore. And it will say to them, ‘Welcome, come on in’.” A rousing rendition of the hymn “The Church’s One Foundation” was sung by all. The Rev. Ben Maddison offered thanks to a host of persons who made the night possible and closed the wonderful evening with a moving prayer.