Savannah, GA – The Evangelical Lutheran Church of the Ascension located on Wright Square in the Historic district of Savannah, Georgia has marked a major milestone on the church’s $3.4M restoration project.

Over the past four months, Ascension has undertaken a Capital Campaign, directed by James D. Klote & Associates, Inc. (JDK&A) of Falls Church, VA.  The principal focus of this consultant-directed phase of the campaign was to personally visit each of the 250-member households to review the needs and opportunities of the restoration, present them with a full-color 20-page campaign brochure and invite their financial pledge to the project. 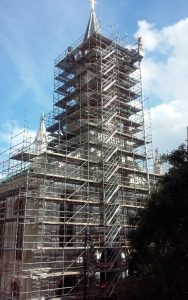 At the conclusion of the 14-week, resident-directed Capital Campaign, those visited have pledged a total of $1,880,550 toward the overall restoration project goal; 5 times the congregation’s 2016 annual giving.

“Our firm is delighted to have partnered with the leaders of  Church of the Ascension in the interest of this critical campaign for deferred maintenance,” stated Jim Klote, President of JDK&A.