Washington, DC – A beautiful fall day and the first full house in worship since the start of the pandemic helped to dedicate an impressive $16.5 million dollar project at National Presbyterian Church.

This inspiring project tackled a number of projects from deferred maintenance to meeting space.  A new main entrance was constructed near the parking lot including two new elevators.  New ‘garden rooms’ with walls of glass overlooking a beautiful fountain were added to provide space for Bible studies, wedding receptions and other gatherings.  The outdoor terrace was expanded and renovated.  A library and nursery were added on the lower level.  The Youth Rooms were thoroughly renovated.  Extensive deferred maintenance was completed including new heating and cooling and air handling systems, new and renovated restrooms, as well as technology upgrades and improvements to the organ.  Perhaps the most impressive change was the construction of a new central stairway that links all levels of the main building that were previously hard to access and confusing to find.  The final piece of the campaign was a commitment to contribute over $1 million dollars to mission partners in the DC area as well as around the world.

The project began with the formation of a facility master plan in 2015 that identified a long list of improvements and changes that should be accomplished to ensure that the campus would continue to effectively meet the needs of the congregation for decades to come.  Initially, the Reverend Dr. David Renwick had targeted $6 million to $7 million as a reasonable goal for a capital campaign to begin addressing some of the issues identified in the master plan.  However, after National Presbyterian had selected James D. Klote & Associates as their capital campaign consultant, they were encouraged to set their sights much higher.  Dr. Renwick has said, “Klote & Associates was instrumental in convincing us that we could raise much more than that, in fact, much more than we had even dreamed of.”

Soon, the project list was formed, and a capital campaign kicked off publicly in February of 2018 to raise $14.3 million.  Less than a year later, almost $15 million was raised in pledges.  Over twice what church leadership thought they could raise when the planning started.  At Sunday’s dedication, Dr. Renwick announced that over $11.5 million has already been received of that $15 million even though there is still 3 years left in many donors’ pledge commitments.  If all pledges are received, the entire project will only leave approximately $1.5 million for a long-term loan, however Dr Renwick encouraged the congregation to eliminate that last $1.5 million as well over the next three years. 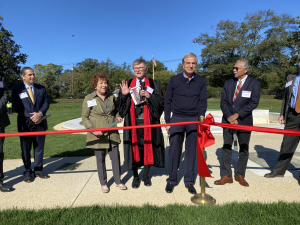 The ribbon cutting ceremony served as the culmination of several years of hard work on the project from planning, to fundraising, to construction.  Numerous individuals actively involved in the project including capital campaign consultant Steve Siegel and President James Klote of Klote & Associates were invited to cut the ribbon along with capital campaign co-chairs Clyde and Ginny Taylor and Bryce and Katherine Pippert.

As Covid restrictions begin to ease in the months ahead, members and friends will have the opportunity to enjoy these new spaces on a regular basis, as will numerous fine arts groups from the DC area who use National Presbyterian as a meeting and concert venue.

At Sunday’s dedication, Dr. Renwick, a native of Scotland and wearing his authentic ‘dress kilt’ said, “How wonderful that so many of you have given of your time, talent and treasure in the past few years to re-shape our church and people and buildings – in such a way that thousands of people will continue to praise and serve God at Nebraska and Van Ness, and far beyond, for many decades to come.”

Campaign consultant Steve Siegel added, “This was one of the most satisfying campaigns I’ve had the privilege to be a part of in my 13 years with Klote & Associates.  Everyone, from staff, to leadership to congregational members were eager and willing students.  They completely dedicated themselves to the proven process and methods for raising funds and followed the plan impeccably.  The results speak for themselves!”