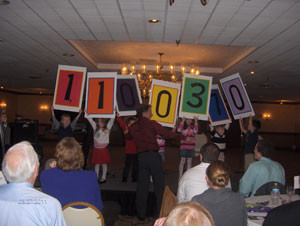 Xenia, OH – With anticipation and excitement, Mt. Zion Church kicks off its Reaching Up & Reaching Out Capital Campaign at the Presidential Banquet Center on Sunday. Over three hundred members and regular attendees enjoyed a day of worship and fellowship. They enjoyed testimonies of Roger Coy, John Draper and Caleb Rowe, sharing the past, present and future of Mt Zion. The highlight of the morning was when the children unveiled the $1,103,700, raised thus far from 33 families and the congregation erupted in cheers. “It was exciting to see the congregation erupt in cheer when the children unveiled the dollars raised so far. Members could be heard saying they could not believe we raised this much from just a small number of families,” said Mel Kalagian, Campaign Director of James Klote & Associates. The campaign need is to pay off the $3.4 million debt in three years and continue to grow God’s Kingdom. “Interest is the cost of putting off our $3.4 million debt. If we only make the minimum payment, it will take eight more campaigns and $4 million in interest to pay off the new building. Now is the time to retire the debt. Can you believe that thirty-three families have pledged $1.1 million? We can do this! If we step up now. Then we can spend that $4 million on ministry, missions, and needed facilities,” said Pastor Larry Stroble. 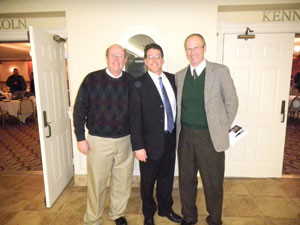 For one hundred sixty-six years, Mt. Zion church has been ministering to the Beavercreek area. It was in 1845, when David Winters planted Mt. Zion and the rest is history. The future is shining bright for the 166 year old church. In 2008, Mt. Zion stepped forward in faith and relocated to its brand new church on Shepherd Rd. in Xenia, OH. Since that move they have witnessed God’s grace on the church and its community. Before the church was divided, now they come together in the foyer and cafe. Before the youth ministry was struggling, now we are seeing tremendous growth. Mt. Zion continues reaching up and reaching out to the world.

Tom Kornbau, Campaign Chair, spoke eloquently of the need to eliminate this debt sooner rather than over 26 years, and be able to do what God is asking them to do. He also expressed to the Mt. Zion families to welcome calls from fellow families, as they would be reaching out to them over the next eight weeks. “Sunday’s campaign kick-off was very exciting. Now we need to continue with trust in the Lord as we move forward in eliminating our debt,” said Tom Kornbau, Campaign Chair.