Ithaca, NY – Celebrating not only Mardi Gras but also great news about their capital fund drive, parishioners of St. John’s Episcopal Church, located at the corner of Cayuga and Buffalo Streets, stepped out to When the Saints Come Marchin In, on Tuesday night. Parading around the parish hall in outfits from holiday masks to feather boas, they rejoiced in the fun-filled finale preceding the commencement of Lent’s austerities. In his opening prayer the rector, Fr. Rich Towers, included the historic phrase: Tomorrow we fast, today we feast! 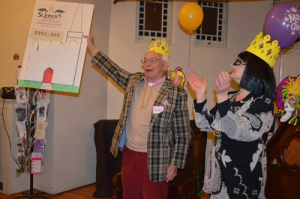 At the climax of the event, when the lucky token had been found in a cake and the selected king and queen had greeted their court, attention turned to the church’s capital campaign. Cheers rocked the hall when campaign leaders announced that more than $992,000 had been raised in pledges from the parish’s members. Clearly, the targeted total of $1 million could be reached – and likely exceeded – after completion of the remaining calls to parishioners. Necessary improvements to the church structure and hoped-for extensions to its mission programs could be expected beyond those listed in the campaign’s immediate objectives.

For the young and old members of the parish who attended, the feast of jambalaya and rice-with-beans ended with the drum beating conclusion that St. John’s is on the march. The Campaign’s motto – Living out Faith, Sharing our Future – is being realized as a creative force within the Ithaca community. Frigid weather and penitential days can only give counter-point to the push toward Easter and completion of the drive.

St John’s Episcopal Church is one of the oldest churches in Ithaca, having been founded as an Episcopal Society in 1822, one year after the founding of the Town of Ithaca. It is the home of Loaves and Fishes ministry that serves thousands of meals each year, and has a history or opposing racial segregation, establishing one of the first Christian education classes for mentally challenged adults, and in providing space for other faiths and congregations when needed including the Greek Orthodox Church and First Baptist Church.