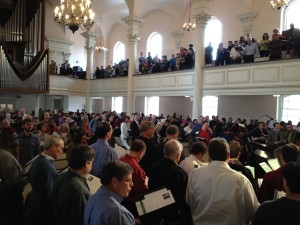 Washington DC On February 5th, a standing room only crowd gathered to kick off a capital campaign for All Souls Church, Unitarian in Washington DC. This historic 200 year old church that counts, among other notables, Presidents John Quincy Adams and William Howard Taft as former members, is now poised to enter its Third Century of ministry to the Washington DC area. After a number of years of urban decline, All Souls has enjoyed a revitalized ministry under the direction of Senior Minister, Rev. Dr. Rob Hardies. What had dwindled to less than 200 congregants now numbers well over 1,200 “ and almost all of them showed up for the campaign kick-off!

Third Century Challenge: Building on our heritage. Realizing our dreams was the theme chosen for this historic campaign (the first in over 40 years) that seeks to totally remodel this historic campus in the racially diverse Columbia Heights neighborhood of Washington, DC. In addition, by taking down an old security fence and remodeling the terrace and entry, the church will be far more accessible and welcoming to the neighborhood which has embraced both its vision and mission. During the service, Rev. Hardies said that, the spiritual foundation of this church is solid as bedrock, but the physical foundation ” the bricks and mortar ” needs our attention if it is to endure for generations to come. He invited the congregation to, join with us in this campaign to make All Souls third century even more glorious than its first two!

The identified building and remodeling needs of All Souls are significant, but the leadership of the church, including campaign co-chairs Chuck Wooldridge and Janet Randolph, believe the church is up to the task. During the service several families shared their own story of commitment to All Souls and why they were happy to be part of the early commitment phase of the campaign. One couple even shared how on a high school teacher’s salary and other part-time work they were able to save $100,000 which they were proud to contribute to the campaign. 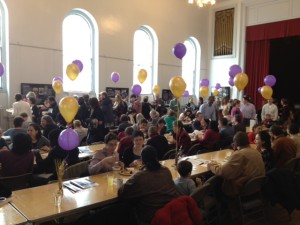 Prior to heading over to the fellowship hall for a light lunch and entertainment, campaign co-chair Janet Randolph was able to make an exciting announcement. With just 60 pledges counted for the kick-off, the campaign had already generated over $3 million! With that kind of beginning, All Souls Church should be well on its way to meeting its needs.

The campaign is being directed by James D. Klote & Associates, Inc. JDK&A is a full-time, on-site capital stewardship consulting firm based in Falls Church, Virginia, and was recently ranked the #1 church consulting firm in the United States by Volkart May, a market research firm in Minnesota. Steve Siegel is the consultant assigned to All Souls. Campaign co-chair Chuck Wooldridge said, We hesitate to think where we would be without Steve’s guidance and direction as well as the support from James D. KIote & Associates. Rev. Hardies added,I know that we would not be anywhere near this level of support and success without the campaign structure and plan put in place by Klote & Associates. 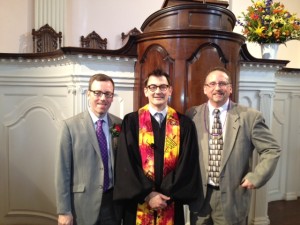 Following a proven method of personal visitation, hundreds of campaign visits will now be taking place with the members of All Souls by a solid group of 50 willing volunteers. All Souls is really looking forward to these personal visits. As one member said, The campaign will give our church new energy and commitment. Being proud of our ‘cathedral’ will do wonders for our self-confidence to truly become a significant force for change in our nation’s capital.