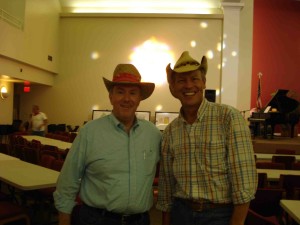 The 25 year old church is embarking on its largest project to date. They plan to raise $8 million and combine their church’s three campuses, which has a weekly worship attendance of nearly 1000 at its five services, into one new multi-purpose facility at their current Hampton Park campus. Ground breaking is scheduled for the spring of 2012.

Over the last four months, the church held 19 Focus Group meetings and a study of the congregation’s readiness for this project was completed. At the Church Conference on June 12th, the congregation voted overwhelmingly to move forward with this aggressive plan. 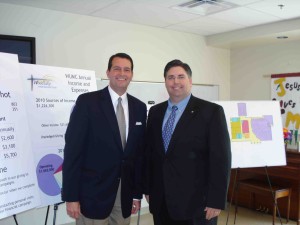 Jim Klote and Chris Shockley, WUMC Campaign Chair at one of the 19 focus group meetings held to learn more about the exciting endeavor Woodlake UMC is embarking on.

Every Sunday for almost three years, the members of Woodlake UMC have created a church sanctuary at nearby Cosby High School where worship services are conducted. The sale of the original Woodlake Campus building is pending.

The church has partnered with James D. Klote & Associates, Inc. of Falls Church, VA to help them raise the needed funds. The Campaign plan calls for all 800 member families to receive a personal visit from other Woodlake UMC Campaign volunteers during the remaining 17 weeks of the campaign

According to Senior Pastor Reverend Peter Moon, We are so excited about this new building opportunity. For twenty five years, Woodlake United Methodist Church has struggled to make room and we are looking forward to serving our Midlothian community and beyond in even greater ways!

Associate Pastor Reverend Michael Whaley concludes that, When each of us prayerfully listens to the will of God, we can accomplish the Great Things He has planned for Woodlake United Methodist Church in the years to come.

Jim Klote, President of James D. Klote & Associates, Inc., stated, We are delighted to be part of this important campaign in the life of Woodlake United Methodist Church. The success of the kick-off event is indicative of the excitement surrounding this campaign effort. The volunteers and staff of Woodlake are dedicated individuals and are committed to achieving the goal of raising the necessary funds for the new Woodlake facility.