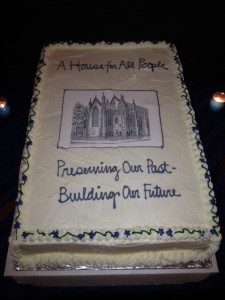 A House for All People Preserving Our Past “ Building Our Future is the theme of the Capital Campaign, which held a Capital Campaign Celebration Dinner on the evening of January 22nd. Even with a local professional football team playing for a spot in the Super Bowl, Grace Church’s Guild Hall was filled to capacity with members and friends who were treated to fine roast beef, rosemary potatoes, string beans almandine and candied carrots. A delicious layer cake adorned with a sketch of Grace Church topped off the meal.

Campaign Co-Chairs Patricia Kavanagh and David G. Booth explained to the overflow crowd why it was necessary for Grace Church to undertake a capital campaign at this time and how the campaign would be conducted. They reminded attendees that the Restoration and Renovation Committee had spent a nearly two years studying the needs of Grace Church and how best to address them. The Co-Chairs described to the attentive audience the improvements to their treasured building which parishioners said through a series of focus group meetings are necessary to support the mission of Grace Church. 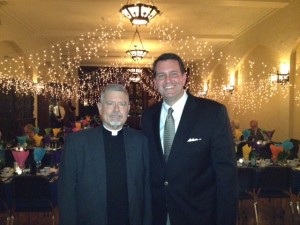 Senior Warden, Thomas Chittenden reflected on what Grace Church has meant to his family over their 45 year association with the parish. He used the sharing of these very personal memories to reinforce the importance of Grace Church to its members and the community it serves in a touching and inspiring way.

Rector Stephen Muncie spoke of his own sacrificial gift and encouraged others to give generously and lovingly. He told the celebrants that, We are all shareholders in Grace Church and I encourage you to give extravagantly in support of the campaign. There was a collective gasp of delighted surprise throughout the Guild Hall when the Rector shared that a small number of Grace Parishioners had already pledged $1,930,000 in support of the campaign.