Cincinnati, OH – Christ Church Cathedral celebrated the near conclusion of a successful capital stewardship campaign to fund two new organs, renovation plan, additional funds for a Cincinnati Scholar House and the annual operating budget. In addition to the operating budget with many pledges yet to be received, the capital funds campaign of $4,169,367 for the renovation and Scholar House was the most ever raised in the history of the church. The celebration, following the Sunday Worship Service on November 22, was the culmination of a 21 week campaign conducted by the James D. Klote and Associates of Falls Church, Virginia. 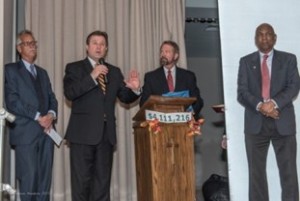 The Campaign Chairman Frank McWilliams, who led a team of over thirty volunteers in this every-member visitation campaign, said “The Cathedral and I have been blessed that our consultant came to us for the Capital Campaign. Jim Klote knows a winner when he sees one.” Providing direction for the initial study and campaign was Glendon Smith, a Director from the James D. Klote and Associates, utilized as a full-time resident consultant for the plan of campaign.

Ernest Thompson the Campaign Co-Chairman said, “This campaign and the money that has been raised is a miracle.”

“Our consultant, Glendon Smith, definitely helped CCC achieve a new dawn of generosity and giving habits. He has been a great coach and mentor to the campaign team and I know he will be missed,” said The Very Rev. Greenwell, Dean of the Cathedral.

Christ Church Cathedral was founded in 1817. The present chapel was built in 1917. The Very Rev. Gail Greenwell said that, “Many of the renovations might be complete in time to celebrate the past 200 years as we look forward to the Third Century of service to Cincinnati and beyond.”

Glendon Smith said, “typically churches raise about one times annual giving when they do it by themselves, which was true here also, and when churches use a part-time firm they might raise 1 1/2 to 2 times annual giving. Our firm usually raise 5 times because we are full-time resident based, however, this campaign was exceptional!”