Kissimmee, FL – The First United Methodist Church of Kissimmee marks its 129th year by looking forward to the next 100 years.

Honoring the past, present and future of the church, a Capital Campaign Kick-Off Dinner was held on Saturday evening. Keynote Speaker Murray Overstreet noted that six generations of his family have called First United Methodist Church home. He gave a historical overview of the expansion and development of the church property and structures, and also some highlights of the people and activities of the church through the years..

Mr. Overstreet shared a story about three church ladies in days gone by who prepared and sold wonderful breakfasts in order to raise money to improve the lighting of the sanctuary. That, he said, was their legacy to the church. Members were challenged to be a part of this legacy for First United Methodist Church.

As Pastor Bob Wooten spoke, he reminded all that as beautiful as the refurbished sanctuary will be, it is, after all, bricks and mortar. The essence of the church is that it is a spiritual home to many, reaches out and seeks to be the light on the hill to our community and all God’s kingdom. 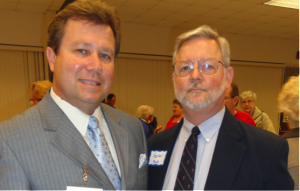 Pastor Bob Wooten on the right, with Klote Campaign Consultant Glendon Smith on the left.

The Sanctuary is on the United States Register of Historical Places, and its restoration is the primary focus of the Capital Campaign. While updates and enhancements will be added, including improved handicap accessibility, lighting and sound system, the artistry of the design and furnishings will be preserved and restored to its original vibrant splendor. Glendon Smith, James D. Klote & Associates Campaign Consultant, is assisting the church in its Capital Campaign. As the Campaign Kick-Off Dinner came to a close, it was disclosed that the church congregation has already had pledged $771,774.00 to the Capital Stewardship Campaign in advanced giving. This amount was pledged by less than 10 percent of the members.

Each of the remaining families and individuals within the church will be contacted in the next few weeks by a fellow member for a personal visit regarding the Capital Stewardship Campaign. Following the event those who attended could be heard saying, We should get together and do this every year!, This was a fabulous event!, and Excellent dinner & event, I was surprised how many people came out on this rainy night. Folks experienced a shared vision, the process and setting goals together. They were thankful for an organized church. It was a reflection of the team building that has occurred under Pastor Bob. That it was their church and their event. A greater sense of ownership was realized for those that attended this event. The overall response has been overwhelming since the event also! People were surprised how nice it really turned out to be. They were impressed with the personal hand addressed invitational envelopes that they received at their homes.

There is an air of excitement at the church as this next step in faith is being taken to extend this legacy of faith into the next century.