Kissimmee, FL First United Methodist Church of Kissimmee celebrated the conclusion of a successful capital stewardship campaign to fund a Sanctuary renovation plan, additional funds for mission and outreach ministries, a reserve fund and the annual operating budget. In addition to the operating budget with pledges surpassing any prior year, the capital funds campaign goal of $836,000 for the renovation and missions was surpassed by over $172,000. The celebration, following after each Sunday Worship Service on December 11, was the culmination of a 15 week campaign conducted by the James D. Klote and Associates of Falls Church, Virginia. 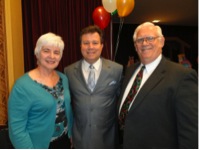 ‘Meeting Code’ was a primary concern when developing the renovation plans. New handicap provisions will include new entrances; enlarged restrooms and a wheelchair lift to the enlarged chancel area. Other improvements will include enhanced audio/visual systems, new flooring, renovated pews and other architectural enhancements.

The Reverend Bob Wooten along with Co-chairs Wayne and Dianne Schoolfield, Mel Wills and Barbara Watson led a team of over forty volunteers in this every-member visitation campaign. Providing direction for the initial study and campaign was Glendon Smith, a Director from the James D. Klote and Associates, utilizing a full-time resident consultant for the plan of campaign.

First United Methodist Church was founded in 1882. The present Sanctuary was built in six months in 1913 at a cost of $28,000. Pastor Wooten said that all the renovations will be complete in time to celebrate the past 100 years as we looks forward to the next century of service to Kissimmee.