Kingston, ON – Fast on the heels of a Kick-Off celebration for the Shaping Our Future: Building on Faith Capital Campaign, Edith Rankin Memorial United Church announced that they passed the $1 million milestone.

According to Gordon Sinclair, Campaign Steering Committee Chair, The Kick-Off Event was a spectacular evening of faith and fellowship. Though much work still lies ahead, the $1 million milestone was a notable achievement for the people of Edith Rankin.

The evening of fun and festivities took place at The Ambassador Hotel & Convention Center in Kingston. Entertainment included world-class violinist, Trevor Dick, performing a duo with Brad Toews on piano. Trevor describes himself as,A music missionary on the violin called by God to encourage others to discover and worship Jesus Christ.

I could not have hoped for or imagined a more wonderful evening! said Chuck Wilson, James D. Klote & Associates Campaign Director. Our volunteers, led by Kick-Off Event Chair, Rebecca Stacey, planned and executed a remarkable happening. The quality of the entertainment was off the charts! The husband & wife key-note speaker team, comprised of Rev. Dr. Wayne Soble and Rev. Dr. Jean Stairs, knocked it out of the park with their humorous and inspired sketch. 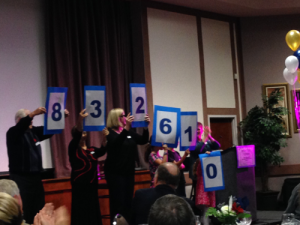 Announcement of amount raised at the Kick-off Event

What a great event! said Rev. Dr. Wayne Soble. The food and entertainment were wonderful but the best part was discovering that all these church folks really knew how to par-tay! There was this terrific sense of community, celebration and optimism. The buzz created by the announcement that we had already received pledges totalling $832,624 has lasted well beyond the occasion and has done a lot to nurture the momentum that quickly propelled us past the $1 million mark. This campaign is already a success.

Also revealed Kick-Off night was the Campaign Tally Board, comprised of a mock navigational chart of the northeast corner of Lake Ontario (including Collins Bay where Edith Rankin Memorial United Church is located). The church enjoys a spectacular water view off the right side of the sanctuary. A tall-ship under full-sail approximates campaign progress along a channel marked by red and green buoys denoting incremental dollar amounts. The iconic anchor, that has long been located at the corner of the church, defines the campaign goal of $2.5 million.

I want our congregation to be a safe and welcoming place for all kinds of people to pay attention to the things that matter most in life. Edith Rankin Memorial is already blessed to be a thriving faith community and our building expansion will simply improve the opportunities for all sorts of folks to pay attention to the Holy Mystery we call God, to relationships, love, justice. These are the things that give people hope and meaning in their lives. Whether church is a high priority for folks or hardly ever on their radar, hope and meaning are everybody’s business and Edith Rankin is more than eager to go into partnership with them.

This campaign is about more than raising money for bricks and mortar. It’s about directions in ministry and service to the community that are relevant to a new generation of seniors, to young families in search of meaningful spiritual foundations, to all sorts of folks who may be surprised to discover that the old grey church ain’t what it used to be and who will never know what they’re missing until they’ve tried it.

I think the results of our capital campaign have even surprised us. So far it has been a great success financially, but it has also generated a tremendous level of interest, excitement and ownership. Household visitations have deepened and strengthened relationships. Worship attendance is up. The Spirit is at work for sure but the project is predominantly led by remarkable lay people who have invested an unprecedented amount of time and energy in it. And we have had the benefit of an excellent consulting service in James D. Klote and Associates whose friendship, integrity and expertise have been invaluable.