Rockville, MD – Christ Episcopal Church and School in Rockville, Maryland kicked off its Capital Campaign – “Firm Foundation Bright Future!”-  in record style.  As of August 20th, 57 families had already committed over $1.9 million dollars.  That total not only represents the best Capital Campaign Kick-Off in their history, it’s already TWICE the total amount raised in their last campaign! 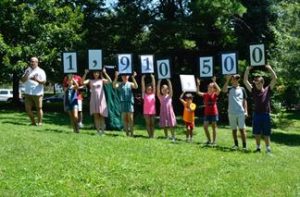 Christ Episcopal Church and School is preparing to ‘right size’ its property and real estate with a new classroom building.  In addition, all the existing classrooms and restrooms in the lower school will be remodeled and numerous improvements are planned for the church including a new elevator and other deferred maintenance.  All of the improvements for both church and school are estimated to cost approximately $4 million with another $500,000 earmarked for a reserve fund.  If the entire project can be completed, both church and school will not only enjoy significantly upgraded and efficient spaces, they will also be completely debt free.

Paul Mamalian and George Wolohojian are serving as Co-Chairs of the campaign and on Sunday afternoon during a casual picnic gathering on the grounds, they were happy to report to the crowd the inspirational level of support already committed from just a small group of donors.  The $1.9 million in pledges is a level of success that neither Christ Episcopal Church or School had ever achieved before in any campaign, much less by the public Kick-Off! 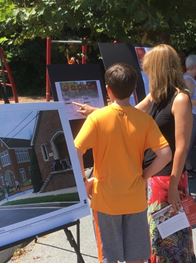 “We’ve been blessed with a generous outpouring of support,” Wolohojian said.  “The early response to this campaign is outstanding.  I am very grateful to the committed corps of donors who have provided this solid base from which to launch the public portion of the campaign.”

The stage is now set to engage the church and school community in raising the rest of the dollars necessary to complete the entire project.  Personal visits with church members, school families, alumni and other interested individuals will continue through September.

James D Klote & Associates (JDK&A), a firm specializing in capital funding projects for non-profit organizations, is directing the campaign.  Steering Committee member and Senior Warden of Christ Episcopal Church, Christie Carrico said, “We’ve all stepped out of our comfort zone in this campaign and have benefited greatly from the direction of our campaign consultant.  A few months ago, almost none of us believed we could achieve this kind of result.  We’re all believers now!”

Both Senior Minister John McDuffie and Head of School Caroline Chapin have commented that they’re having fun learning and practicing new skills in how to ask for financial support.

Steve Siegel is the consultant serving Christ Episcopal Church and School from JDK&A. It’s been a rewarding project for him because the leaders on the steering committee have been good students of the process and have followed the principles of the campaign plan even if they had some doubts early on.

“A previous Capital Campaign here was somewhat contentious,” Siegel said, “but the leadership now has experienced first-hand the benefits that can come from rolling out a campaign the right way.”