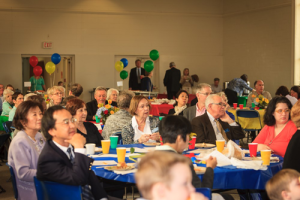 Building Our Future is the theme of the campaign, which held a Capital Campaign Celebration on the afternoon of April 13th. Memorial Hall was filled to near capacity as over 150 members, friends and guests came together for a luncheon of chicken breast stuffed with goat cheese and maple glazed salmon. The meal was catered by Geppetto Catering, a locally recognized leader in environmentally friendly food service. Doreen Gentzler, NBC news anchor at WRC-TV, served as the Master of Ceremonies for the afternoon’s program which featured an opening prayer from Rev. Dr. David Gray.

The festivities got off to a humorous start as the Chancel Players spoofed the physical needs of the church building in their introduction of Doreen. The good natured MC took it all in stride as she expressed what it has meant to her and her family to share the love and fellowship they have found at Bradley Hills. Doreen then introduced campaign co-chair, Melissa Panagides Busch.

Melissa, in her remarks, explained to the attentive crowd why it was necessary for Bradley Hills to undertake a $3.6 million capital campaign, the campaign goals and how the campaign would be conducted. Her comments were made all the more meaningful as she described the scene at Bradley Hills on her wedding day. There inside the sanctuary, were all the people I loved, in my church. Melissa, and many in the audience, had to pause for a moment as the warm wave of emotion passed over them. 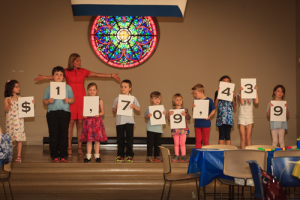 Announcement of amount raised at the Kick-off

With the smoothness of an experienced professional, Doreen guided the program from this emotional high point to the day’s comedic high point. Jennifer Royal and Ethan Green performed selections from The Sound of Music with lyrics that were modified by Bradley Hills Director of Music, Matthew Robertson. The Do in the song Do-Re-Mi was no longer a female dear, but rather the funds need to fix a leaking roof! Jennifer and Ethan brought Matthew’s playful rendition of this Rodgers and Hammerstein classic to life to the absolute joy of the assembled guests.

Doreen used the musical message of raising money as her transition into revealing the amount of pledges already received. With the assistance of Melissa and ten children from the audience using placards, the amount was displayed “ but not without some confusion. Commas were out of place and numbers reversed, so the first attempt was not quite right. With some shuffling and moving of children, Melissa and Doreen finally got it right; $1.709 million raised to date!

As the program was coming to a close, the spiritual nature of the campaign was reinforced; first by a beautiful hymn, Come Sing, O Church in Joy, with lyrics written by long time member, Susan Bowis, to music composed by John Darwell (1770); and then with the closing prayer, the campaign’s prayer. It’s recital in unison was led by Kori Phillips, Associate Pastor.

All in all, it was a grand afternoon befitting the launch of the Building Our Future capital campaign at Bradley Hills Presbyterian Church.