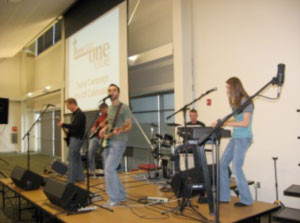 Ankeny, IA – Ankeny First United Methodist Church held its Capital Campaign Kick-off Celebration on March 27, 2011. The excitement and enthusiasm from the more than 500 attendees was exhilarating and uplifting. The dinner event was catered by an award-winning barbeque company, which is owned and operated by someone who attends the church. The food was great! A wonderful program; including contemporary praise & worship music, singing by adult and children choirs, words of witness, testimonials, a skit and a video, made the evening a very good setting for Christian fellowship. The combined fellowship from all three church sites created unity and relationship building for those who attended. 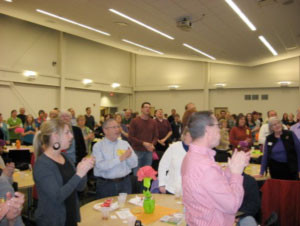 The church has completed approximately one-third of a twenty week campaign and has already raised more than $1.6M. The highest amount ever raised in previous campaigns by the church is $1.9M. The potential for this campaign is indeterminable at this time. The needs and opportunities for the campaign include mortgage reduction for the Christian Life Center (CLC), capital-intensive mission projects and capital improvements. The 30+ team members on the Steering Committee, including the Campaign Co-Chairs and Lead Co-Pastors, have helped make the campaign successful to this point. 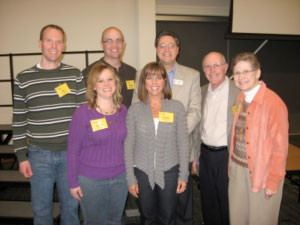 Martha Ward, Lead Co-Pastor, shared a compliment from one of the members of the congregation. “This morning I was exercising beside a retired woman in our church”. Her first remarks to me were: “Last night’s program was marvelous! Do the campaign leaders attend at the CLC? They were excellent.” When I agreed that you are all doing an outstanding job, she replied, “It was good to have an evening to assess their leadership. They are SO COMPETENT! The future of the church is in good hands.” Martha stated “I couldn’t agree more.”

Bob Ward, Lead Co-Pastor, was asked what he thought of the Kick-off Celebration. He said “It was almost unbelievable. The responsiveness from the crowd was even more than at previous events.”

Angie Thornton, Campaign Co-Chair, stated “The program was fun, inspiring, impactful and unforgettable. It was fun to see the look on people’s eyes when we announced the amount pledged thus far. They were amazed and excited.”

Other comments from those who attended the wonderful event were:

“The event last night was great!”

“The Kick-off event was really exciting and has helped provide some good energy around the campaign.”

“I am confident we will meet all of our needs and opportunities, and through our Lord and Savior we will reach out to our community, Central Iowa and the World.”